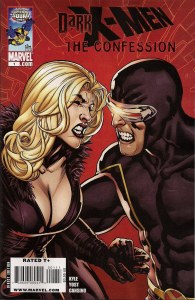 Scott Summers and Emma Frost have been keeping secrets from one another. He’s been sending teenagers off to murder the X-Men’s enemies, she’s been bedding down with Norman Osborn’s cabal. But today they share their darkest, dirtiest doings, in cheesy back and forth mental confessions.

And, twisted pair that they are, it turns them on. Oh yes, they may try to fool themselves with their daytime soap dialogue 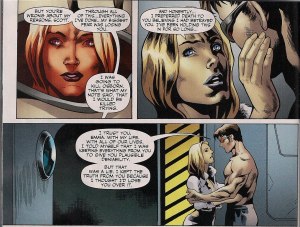 but within panels they’re jumping on one another. Oh yes, ever since Dark Phoenix, Cyclops has liked a bad girl and now that he’s dragged himself down to their level, the bad girls like him even more.

Thinking on, Cyke’s even worse than Emma these days; he’s ordering the deaths of his enemies – he doesn’t get his own hands dirty. That, my friends, is the work of an evil mutant and no amount of dissembling – apparently it’s OK for X-Men to murder so long as they dress in black and call themselves X Force – will change that.

Craig Kyle and Chris Yost have written a few decent X-books in their time, but this isn’t one of them. It’s excruciatingly awful, a clunkily plotted, embarrassingly executed slice of sick soap. And the end result is that two characters are destroyed as heroes for all time – there’s no coming back from this, with Scott and Emma embracing their vileness and not really caring so long as they have each other.

Longtime X-writer Chris Claremont has taken some stick over the years (ahem) for his flowery writing, but I’ve no doubt he could have sold this story rather better than the creators here. They give us corn, Claremont would have provided spice. And if he’d taken a whole issue to do it he’d have given us a classic (remember Lifedeath, the Storm/Forge two-hander in X-Men #186?). And why is this story resolution in a separate book when everything in it springs from events in the monthly titles? Every week brings more Dark Reign specials, and we’re well into the diminishing returns column.

Penciller Bing Cansino and inker Roland Paris draw page after page of flashbacks that are meaningless unless you’ve been reading all the X-books for several years, which ain’t me. They deserve kudos for an Emma Frost who isn’t a sex doll, while having the strength I associate with the White Queen . . . until the script has her lose all spark, and they make her suitably vulnerable looking.

Well as vulnerable as the Twisted Bride of Cyclops could look.

Scott Summers spends most of the book in his boxers, which is nice, but it doesn’t justify this truly rubbish concoction. Avoid.