‘One of the things I loved, following on from how Grant worked in and greatly personalised the International Club of Heroes, was how in a few pages of RIP he managed to give these multinational heroes their own set of archenemies like Le Bossu and King Kraken’

And here’s James Robinson himself using some of DC’s international heroes (click to enlarge): 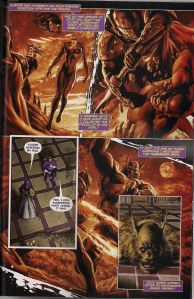 Hmm, I think someone missed a point somewhere.

The subject of the text piece is the villain Prometheus, created by Morrison as a foil for the JLA but never really catching on with readers. Robinson thinks he’s not been used properly since his JLA debut but I’d argue that his gimmick – a helmet that can download ‘any conceivable data he might need directly into his brain’ – is so stupid that making him cool is pretty much impossible. Robinson seems to be admitting this in having Prometheus report that he’s murdered a bunch of heroes in order to appear a threat to Hal Jordan’s Justice League. We don’t see Prometheus plotting great schemes and having awe-inspiring battles; no, we just get told that he’s killed a bunch of folk, and see some death scenes. Ooh, scary.

That was the proud claim on the covers of the Justice League of America in its Silver Age heyday. Green Lantern, Atom and Green Arrow were members in good standing, shining science heroes whose sheer goodness set the villains in dark relief. While not saints, they’d never abuse their abilities to beat a villain, they’d always find another way.

In this comic Green Lantern stands over a bad guy as the Atom wanders around his head, inflicting huge pain that causes his victim to scream out. Green Arrow, whose decades-established character demands that at this point he challenges/punches his fellows, before walking out, simply mutters: ‘I gotta ask, Hal — is this right? I mean, isn’t this torture?’ Hal justifies the crime they’re committing by referencing the recently killed Batman and Martian Manhunter.

Yes, Green Lantern is condoning torture because super-villains have been doing evil things.

And the Atom is carrying out the torments by doing pretty much exactly what ex-wife Jean Loring did to kill his friend Sue Dibney. Granted, Ray Palmer has better control of his size and weight changing, but you’d expect Jean’s actions to deter him from trying such a trick.

Earlier in the issue Hal has the gall to ask the newly arrived breasts of Supergirl, ‘Are you here now as a hero, or as a villain?’ Look in the mirror, you dumb, green hypocrite.

Poor Supergirl is suddenly as melodramatic as Hal and pals, telling them about the recent killing of her father and declaiming: ‘Together we can be justice!’ Phew, thanks Kara, I’d nearly forgotten this book is about snarling heroes wanting revenge – the Grimace League of America.

I could also do with this book being less self-conscious. Would people in the DC Universe really rank villains as B-list or whatever, given that any one of them can do something heinous, way beyond anything they’ve done in the past, given the opportunity? And while in the real world Elvis Presley apparently based his look on Captain Marvel Jr, would Green Arrow really refer to Freddy Freeman as ‘Elvis Jr’? In the context of the DCU it makes no sense; it’s not even as if artist Mauro Cascioli draws Freddy with an Elvis look.

When the dialogue isn’t awash with exposition (‘Not to mention the murder of my friend Mike Dante, as well as Jay Garrick’s buddies–‘), it’s trying too hard (click to enlarge):

It may sound like I’m being too tough on this book, but I know James Robinson can do better. I’ve no idea why he’s trying to write a grim and gritty comic at the end of the first decade of the 21st century; the time for such a treatment is past, and it certainly doesn’t suit his talents. When he’s concentrating on sheer superheroic fun, the story comes alive, as in a terrific spread featuring Congorilla and Starman Mikaal leaping from a plane to fight those robots. And the aftermath, with our heroes in the sea, has a priceless moment with the old golden gorilla.

Another highlight is a single page featuring a bunch of old Jack Knight Starman characters in Opal City – just a quiet moment with people who know one another well, but it truly works. There’s no gritting of teeth, no posturing, not a single cry for justice.

If James Robinson played to his strengths, and everyone stopped taking themselves so seriously, we might have a fun superhero book. I hope that’s what we’ll get when Robinson joins artist Mark Bagley for a run on the regular JLA title. But we’re not going to get this here. I should stop buying, but I’ve become a rubbernecker. I’m buying this nonsense when I should be crying for quality.