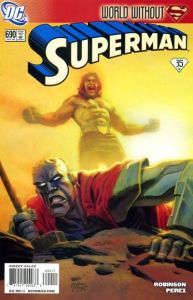 I’ve been praising this book to the heavens recently for its blend of rich characters and lush artwork. This month DC lets me down. Half the book is taken up with a wordless battle between Atlas and Steel.

One page is the same panel repeated four times . . . sorry, that’s unfair, two of the pictures show the hand of Atlas. Thrillingly. Perhaps the intention is to convey, as they say in TV, a beat – Atlas is temporarily immobilised by Steel’s organic metal claws. What’s actually conveyed is a lack of effort. 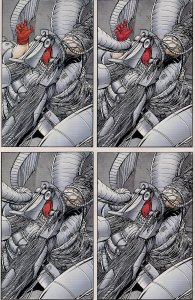 The rest of the book involves:

1) A Science Police scene that’s simple admin and a fun gag involving a PC gay bore (‘To be continued in Superman: Secret Files 2009’).

2) A terrific Zatara sequence revealing that there’s more to his assistant than meets the eye.

3) A page of Dr Light, the Guardian and their kids in the park (‘To be continued in the pages of Superman and the Justice League of America’).

4) A meeting between time-displaced Legionnaire Tellus and dullest Green Lantern ever, Sodam Yat, with tangential bearing on Mon-El, current co-star of this comic but absent this time (‘To be continued in Superman Annual #14 this summer’).

Now, does this sound like a satisfying comic? If I wanted a bunch of scenes telling me to read other books I’d pull out my old, sad issues of Countdown. The vignettes themselves are well-enough written, but if they’re not important to this title, don’t put them in it. Were they even meant to be in this issue, or planned for some DC sampler? Look at the note tagged to Dr Light and the Guardian – ‘To be continued in the pages of Superman . . .’ This IS Superman!

Points, though, for the title being honest: ‘The set-up.’ Indeed. And fill-in artist Pere Perez draws up a storm, while Andrew Robinson’s cover is a powerful image.

As this is one of my favourite monthly reads I’ll give it a free pass and assume a schedule crunch motivated this less than stellar issue. But can we put some effort in next time, please chaps?