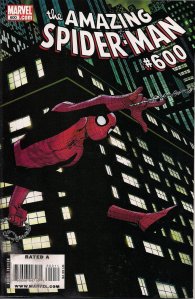 Yup, it’s the big day, May Reilly Parker is getting hitched to J Jonah Jameson Sr and all hell’s breaking loose as every mechanical object in New York gains a mind of its own. And that mind belongs to Dr Otto Octavius. Obviously, her former beau wants to wreck May’s big day.

Actually, no. What he’s really up to is one of the nicer points of Dan Slott’s story, “Last Legs”, lending a poignancy to proceedings. Before the massive, 62pp tale is done Spider-Man’s fought Octopus and his surprising seconds, teamed up with the Avengers, Human Torch and New Avengers and generally shown why he deserves to have kept his comic for nearly 50 years. And as much as I enjoyed the action scenes – Pete’s rapport with Johnny Storm is especially delightful under Slott – it was the supporting cast scenes which had me cheering (click for bigness).

And, in the case of Aunt May’s wedding day talk with Peter, weeping. The other scene stealers were CSI Carlie Cooper and Newshen (copyright Lois Lane, 1939) Norah Winters, forced to team up and search for the missing Jameson Sr. And if the comics work ever dries up for Slott he could make a fine living penning wedding vows . . .

Spidey veterans John Romita Jr and Klaus Janson provide pencils and inks, in fine style – their action scenes are all-out terrific, and they’re not afraid to get a little goofy with some of the everyman faces. I was planning a little moan about Aunt May’s tendency to move from aged crone to silver foxy momma from issue to issue, but here we see it’s merely a matter of mood; hair up in one scene, down the next.

Oh, and they get five million points for actually daring to draw the post-Jackman Wolverine as a short-arse. Nice one, chaps. And nice one to Dean White for superb colour work, especially in a window washer scene (I’ll assume Flash Thompson was trying out a blond look for the ceremony). Joe Caramagna letters in fine style – his fingers must be knackered, if he does it by hand.

But that’s not all – this is a 104pp issue with no ads, allowing room for stories by the rest of the Spidey Web-heads, writers Mark Waid, Bob Gale, Joe Kelly, Marc Guggenheim and Zeb Wells.

Waid offers a lovely flashback story of Uncle Ben and young Peter, with lush art from Colleen Doran that’s marred only slightly by some really weird clothing creases – I refuse to believe May Parker was so slatternly with the iron. Still, this was where Ben matched May in the main story, and made me sob a little.

Gale’s short was less to my taste, a depressing little look at why kids don’t want to be Spider-Man, with art by Mario Alberti, apparently using oatmeal as his medium.

Kelly gives us a prelude to a plot beat that’s apparently going to run all year in Spider-Man, featuring portentous old Madame Web, that annoying Kravenette kid and her supervillain stage mom. Grim stuff, but it did at least acknowledge that Spider-Woman III, Mattie Franklin, exists (she may even be at the wedding, with Auntie Marla). The art’s wonderfully creepy, courtesy of Max (thank you Google) Fiumara.

Guggenheim may have missed a memo, as his Aunt May piece is a different spin on a plot point from the main story, but it’s a touching affair, with lovely art from Mitch and Elizabeth Breitweiser – never has May’s wattle looked so enticing.

Now, who’s Derec Donovan? Zeb Wells’s ode to the Spider-Mobile was already good, but as drawn by this fella it’s an instant classic. The art is bright, open, just all-round feelgood. If five pages of drawings can be your best mate, this would be it. Antonio Fabela should also be bowing about now for a perfect colouring contribution.

The issue’s rounded off with four ‘Spider-Man covers you’ll never see’ and apart from the final one, by Brian Bendis and Klaus Janson, I’d be happy had things stayed that way. Really unfunny stuff.

Oh, hang on, there’s another story here, drawn by up and comer Marcos Martin and written by some fella name of Stan Lee. It’s a light-hearted piece of meta-fict . . . oh, the heck with that. Did you hear about the super-hero who went to the psychiatrist? If not, here’s your chance. It’s silly fun, commenting on some of Spidey’s transformations down the years. On the evidence of this, I’d say Lee may have a future in comics.

The Romita Jr/Janson/White cover is a wraparound, though it didn’t need to be, what with the back portion being mainly skyscrapers. The part showing Spider-Man, though, is something to treasure.

That’s quite the package for $4.99 – congrats to editor Stephen Wacker and his team for giving Peter Parker, and fans, such a terrific present.

One thought on “Amazing Spider-Man #600 review”