Over the last few years there’s been an explosion in superhero movies, what with The Dark Knight, Iron Man, Hulk, Spider-Man, X-Men, Fantastic Four and so on. What there haven’t been are many action-packed films for the younger set or, even better, the whole family. There was The Derivatives – sorry, The Incredibles, about a fantastic family. There was Sky High, which saw teen rivalries transplanted to a School For Gifted Youngsters With Less Angst. And there was . . . hmm, how about I get back to you?

But there are at least two properties from DC Comics which seem tailor made for the family audience – Dial H For Hero and Stars and S.T.R.I.P.E. 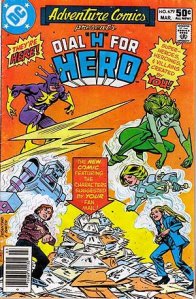 While Dial H has never been a massive hit, it’s had several solid runs. It’s been tried three times, in the Sixties, the Eighties and the Noughties – three generations of creators have been drawn to the idea of a magic dial granting its possessor super powers for a short time, simply by dialling H-E-R-O. Further twiddles of the H-dial have brought us H-E-R-O-I-N-E, H-O-R-R-O-R, V-I-L-L-A-I-N and more. Tell me that wouldn’t make a fine fun-filled romp (or, if you want things a bit more messagey, dial H-E-R-O-I-N. Or perhaps not). Ignore Robby Reed and use versions of Eighties characters Chris and Vicky, with H-dial watch and necklace, for dual gender appeal, add some nasty kids trying to get their hands on the transformers, a soccer mom, comical grandfather, dog . . . the trinkets can go through various hands, wreaking chaos everywhere. There’d be obvious merchandising potential via a dozen or so super-characters to fit various dolls, his and her H-dials and so on. 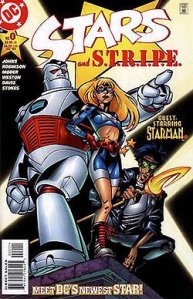 Then there’s Stars and S.T.R.I.P.E, the first comic series written by Geoff Johns, featuring teen cosmic girl Courtney Whitmore and her metal-suited stepdad Pat Dugan. As well as fun heroics – who doesn’t like a sassy lassie and a grumpy robot? – there’s a nice character arc as Court and Pat realise there’s more to each other than boring stepdad and snotty kid. I’d ignore the Second World War ties of the original Star-Spangled Kid and Stripesy, so as not to stretch credibility in terms of Pat’s age, but certainly show them as having been in action about 20 years back in a pre-credits sequence. Court’s main rival, Shiv, would be ignored as she was dull and her name invites a spot of consonant swapping. I’ve no idea who I’d replace her with, but I’m sure screenwriter Geoff Johns – well, this would make a fun assignment for him after his upcoming Flash co-writing gig – could come up with someone suitable.

And again, think of the toy potential. A S.T.R.I.P.E. action figure with all kinds of attachments, Star-Spangled Kid doll with a Barbie-style wardrobe . . .

As for actors, the Disney Channel is constantly grooming – oh dear, there must be a better term – young moppets for TV and multi-media stardom, so by the time these movies are made there’ll be a new Miley Cyrus or Hilary Duff available to step up. Heck, there’s no real reason Dial H’s kids have to both be white/be white at all. And if they start out white, they can always be replaced by non-white actors at various points in the film, so that leaves room for the next Raven Symone.

So that’s two family films right there. Any more for any more?

4 thoughts on “Disney, Warners, SOMEONE make these movies”