Around the time Superman died battling Doomsday, seven million citizens of Coast City were murdered by alien warlord Mongul. The world dedicated a day in Superman’s memory, but when it turned out he wasn’t so much deceased as growing out his hair, the world decided the Coast Citizens could have the memorial day instead.

But not to themselves. Not when there are genuinely dead superheroes to be remembered. So, Hal Jordan tells us at the beginning of a long expository sequence: ‘It’s become a day to honour the super-beings who gave their lives protecting the world – and the innocents we failed to save. Among those innocents – the seven million who were incinerated when Mongul and the Cyborg-Superman destroyed Coast City.’

There you have it, Coast City, afterthought. Mind, it’s greatest hero seems to be over the loss that send him on the path to Parallax, if the huge great grin on Hal’s face as he mounts a flypast of mourners with the air force and other GLs is anything to go by. Yes, he’s bound to be happy Coast City is being reborn with citizens too brave to be cowed by alien deathmongers/folk who realise the odds of that happening a second time are infinitesimal. But he might at least look a tad solemn.

Mind, he is busy in the aforementioned slice of exposition, detailing the various deaths that have hit earth-based GLs. These panels caught my attention (click to enlarge). 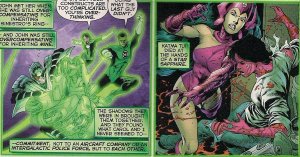 Is it not odd that Hal should gloss over the fact that Katma Tui wasn’t killed by ‘a’ Star Sapphire, she was murdered – chopped into bite-sized bits – by his best girl, the just-mentioned Carol Ferris. So is this a clever piece of characterisation, with Hal in denial? Or is it writer Geoff Johns, not wishing to bring up a rather unpalatable time in Carol’s life?

I wasn’t planning on buying this book, having become wearied by the War of Light in the Green Lantern titles, and the seemingly never-ending Prologue to Darkest Night. But I flicked through this in the shop, saw Aquaman’s widow Mera and weakened. On reading it, I was grossed out by Black Hand’s licking the skull of Bruce Wayne in the opening scene, only slightly less so on recalling DC Executive Editor Dan DiDio recently commenting: ‘The fan knows – or the fans might guess – that was not Batman’s body that was recovered as a skeleton in Final Crisis #6, but nobody else knows that.’

I’m not sure how the mystic forces Black Hand is working with can be fooled by a random corpse, but apparently so. If DiDio doesn’t know, who does?

DiDio was also the person who told us that despite what Final Crisis seemed to show, Hawkman and Hawkgirl never died in there (necessitating the clunky redialoguing of a graveyard scene drawn for a subsequent issue of JLA). Anyone who missed that interview may be surprised by them looking so hale and hearty here, but don’t worry, that doesn’t last for long, courtesy of a couple of two very familiar zombies.

In a literally heart-rending scene, the suddenly sprightly corpses of Ralph (still stretchy – long-lasting Gingold or Black Lantern energy?) and Sue Dibny murder the Hawks, allowing them to be drafted into the zombie army. This comes after a bit of Hawk lore I can’t recall seeing previously. Supposedly a love curse has it that when the Hawks declare their love in each new life, they’re kaput. Hmm, anyone remember that affecting the Golden or Silver Age Hawks, who seemed to be pretty darn lovey dovey for decades? And the timing of this piece of information is all too pat for me. (Johns loves this sort of thing – apparently Darkest Night has been prophesied, as if that means anything in a multiverse where time travel is possible).

Plus, I know this is a summer horror flick on the comics page, but seeing two old 2D friends of mine rendered so hellishly, and acting so appallingly, was a bit much. I doubt I’ll be back for issue 2 if this is the way things are going.

Don’t get me wrong, there’s a lot of craft here. The art by Ivan Reis and Oclair Albert is stunning – they draw a cast of thousands and they draw them well. Standout sequences including the Lanterns’ flypast and Hal’s showing the recently reborn Barry Allen who’s died while he was gone. They’re spreads worthy of the space they take up, though the first was a little annoying in forcing me to turn the book sideways. Colourist Alex Sinclair and letterer Nick J Napolitano were also superb team players throughout.

While I found the script a little too Brad Meltzer at times (‘She made the Atom feel small’; ‘And the fastest man alive does something I haven’t seen him do since he’s been back – he sits down’), I admire the way Johns keeps all his balls in the air. One splendid touch was that Barry Allen was especially upset to hear Ronnie Raymond had died – appropriate in the DC Universe as Bazza’s fellow Justice Leaguer wasn’t much younger than his nephew Wally West, and in our world in that Firestorm had a back-up in Barry’s book for awhile.

The noise made by the black rings is very smart.

I loved Hawkman’s comments about Jean Loring’s relationships with Ray Palmer and the Dibnys; it was good to see him writing the Hawks again.

And Johns gets major credit for the coming inclusion of Lisa Snart, the Golden Glider, an obscure Flash villain but one of my favourites. There are bound to be sparky scenes with her brother Len aka Captain Cold, and equally dead lover The Top.

Oh Lordy, I’m going to pick up the next issue, aren’t I? The Golden Glider, possibly Mera in action . . . if it wasn’t for such grisliness as a vampiric Guardian and the levels of spatter I’d be OK. I really don’t enjoy having old pals turn my stomach, but it pretty much comes with the zombie territory. And DC have killed off so many people over the last couple of decade that they may as well make zombie lemonade.

If this event proves to be the last word on death in the DCU for a long while, then I’ll be there with the applause. But if it turns out to be simply a bunch of ‘kewl’ moments linked by decent characterisation, then I walked with a zombie. Right out of the comic shop.