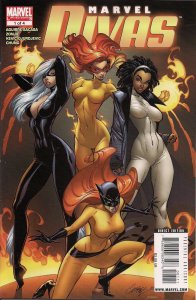 Take three former Avengers and one of Spider-Man’s most trusted allies and what do you get? A superhero Sex and the City that’s at least three years too late. I knew this book was to focus on our heroines – Hellcat, Captain Marvel, Firestar and Black Cat – in their everyday lives, but I didn’t think it’s be quite so shallow. Page after page of swapping stories about crap men over cocktails. Resentment towards such supposedly more successful super-heroines as She-Hulk, Invisible Woman and Storm. And a final page injection of like, super-emotional drama to add a bit of weight.

Taking the last first, and stop reading now if you don’t wish to be spoilt, it turns out that Firestar has breast cancer. In the real world this is a horrible thing to learn. In a superhero universe that regularly has people coming back from the dead, it’s less so. Two of the exes mentioned in this issue have supernatural powers so it’s not unlikely they could zap a few rogue cells. Captain Marvel has about 50,000 light-based frequencies, I’m sure she could do some surgery, guided by the Irredeemable Ant-Man (and she’d get a shag as a bonus). Given how ditsy and competitive the women are here, it’s likely Firestar would put in for a Misty Knight-style cybernetic attachment.

I suppose the fluffy portrayal of Patsy Walker isn’t so far from her origins in Marvel’s Silver Age romance line, Black Cat has always been a bit flighty and Firestar we barely see this issue, so no real problems there. Let’s just say we’re seeing the same heroines from a new angle.

It’s the presentation of Monica Rambeau that gets me. A former leader of the Avengers and extremely capable heroine, she was a bit of a joke in Next Wave, but that was OK as every character was. Here she has another new personality, wittering on the whole time about being black. Apparently she went home to New Orleans to help in the aftermath of Katrina, ‘cleaning up the mess you white people left behind’. The clean-up involved being a member of an all-black superhero crew. Am I missing some point? Does Monica only like non-blacks if they get pissed with her?

There’s a single panel in which we see our heroines fighting together and what do we get? (Click for bigness)

A stupid bloody wink from writer Roberto Aguirre-Sacasa. He can do better that that, if a gag about Beta-Ray Bill is anything to go by.

The art by Tonci Zonjic is delightfully expressive, and airy in a Darwyn Cooke way. If the level of cartooniness was more consistent from panel to panel it’d look even better.