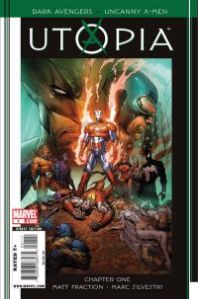 I’m old enough to remember the X-Men fighting villains who weren’t mutants, when they had time between adventures to play ball, go to the mall, even have romances with ordinary people. Then came the superb Days of Future Past story (Uncanny X-Men #141-141) and its success encouraged writer Chris Claremont to revisit the idea of anti-mutant hysteria. Not once or twice but again and again, until the book became less about superheroes who shared a common origin than than a tale of oppressed souls, constantly battling mutant haters, supervillains and politicians alike. ‘Hated and feared by the world they have sworn to protect’ went from being a clever legend line that occasionally fed into the stories than the team’s reason for being. And I bailed as a regular reader.

I’ve popped back regularly since giving up my monthly dose of X-Men around the time the X-Men ‘died’/went to Australia (yes, there is a difference), and have enjoyed a fair few stories, while wishing the book would stop being quite so angsty. Yes, we get it, if you’re Jewish, or gay, or – God forbid – ginger, you’re a bit like the X-Men. We’re currently going big on the gay metaphor, with Scott Summers and co having moved to San Francisco after the School for Gifted Youngsters was destroyed for the umpteenth time.

This first bookend to a crossover begins with a perfectly legal anti-mutant march on San Francisco being intercepted by a bunch of mutants led by a strangely confrontational Beast. Big brain Hank is surprised when fighting breaks out between the two factions, and winds up tasered and in a cell. It’s all a bit embarrassing for the Mayor, who had invited the X-Men to find sanctuary in SF. Soon the rest of the team and sundry younger mutants are firefighting across the city and not doing too badly until Norman Osborn and his Dark Avengers arrive . . .

X-Men writer Matt Fraction doesn’t have as much fun introducing the Dark Avengers via his patented infobursts as he does with his regular characters (well, I don’t think so – they’re printed in a tiny font, in dark blue out of black, so who can tell?), but he gives them some good moments. Ares, in particular, has a wonderfully entertaining chance to shine, while Ms Marvel shoots off a line worthy of Emma Frost at her best. It’s his regular protagonists who come off badly, with Beast an impetuous buffoon and Colossus happy to beat up young X-Man Rockslide, who’s having his own off-moment.

Nevertheless, this was an engrossing book, reading like the culmination of two decades of ‘let’s have a Mutant registration act’. I’d be thrilled to bits were this story indeed to put the lid on this tired theme for a while, but I can’t see it happening. It’s been the default for far too long now.

I enjoyed the real sense of place engendered by the script’s hopping around the city: one minute we’re in Market Street, then it’s off to the Embarcadero before climbing Nob Hill and so on. There’s a pleasing intensity to the script, as if the story matters. And while I could live without the Grrr-We’re-The-Dark-Avengers, Norman Osborn works well in his scenes with fellow Cabal member Emma Frost. And the ending, despite another rubbish moment for the Beast (‘Are you speaking in my head?’ he wonders cos, you know, the Beast’s never encountered a telepath), has a twist I never saw coming.

Last time I saw Marc Silvestri pencil at Marvel was on that final Grant Morrison story I mentioned earlier, Here Comes Tomorrow, and here he comes again. I’ve never understood why he’s quite so lauded, but it’s decent comic art, even with the handicap of seven inkers – the finish is nowhere near as inconsistent as I’d expect, so well done all. And Frank D’Armarta applies colour intelligently, while Chris Eliopoulos is undaunted by a wordy script.

A couple of questions: Loki appears for one panel, in male form – has he changed back from the ugly bint of recent Thor vintage, then? And where does Toad keep that tongue?

The cover is classily designed, with smart furniture, but the movie poster style illo could do with being less murky. And how many times do we have to have the X-Men lying defeated on a hill, like the Peanuts gang staring up at the clouds?