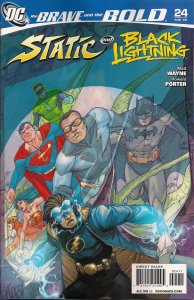 I never came across Static when he had his own title, having tried a few other Milestone books and found them not for me (too self-consciously urban, with colouring that didn’t appeal). I’ve never seen his cartoon, I don’t believe it made it to the UK. I have seen him in Teen Titans, in which he seemed a nice kid with standard electric powers and a strange attachment to his overcoat.

Well, the coat’s here, as expected, but this issue’s team-up with Black Lightning lets me know there’s more to Static than static. He manipulates electro-magnetism, as well as firing standard comic book bolts (well, standard for today; I’m old enough to recall electic blasts as yellow, not blue). And as scripted by Matt Wayne, he’s a lot wittier than I’ve seen.

Black Lightning isn’t witty, but then he rarely is – he’s the strong, silent type, though his meeting with Static brightens him up a little. By issue’s end they’re on the way to being fast friends.

I didn’t quite get why Static bad guy Holocaust wanted to barbecue Black Lightning – something to do with Jeff Pierce’s time as Lex Luthor’s education chief, and Holocaust’s riverboat casino. Are floating gambling den’s educational? I dunno. Apparently Holocaust knows he’s been fed duff information blaming Pierce for shutting him down, but he’s going to kill him anyway, because otherwise some unnamed third party will kill Holocaust . . . feel free to explain it to me, anyone.

Whatever the reason for the fight, the battle itself is fun, with Static keen to show Black Lightning – whom he considers suspect for his dealings with Luthor – how it’s done. That they predictably come together to take down ‘Holly’ isn’t a problem, this is a team-up book. I enjoyed the heck out of it and would happily try a Static strip now. I particularly enjoyed his banter with apparent best pal Frieda, whose knowledge of his Static identity made for some cute moments.

The art by Howard Porter and colourist Tom Chu jollies the story along nicely, giving us plenty of character and some commendably big moments. Its openness reminds me of Scott Kolins on Flash. My tiny quibble is that the lightning look too quiet – more flash please, gents.

So that’s a nice straightforward superhero team-up. Inessential, but character, action and heart made me glad to read it.