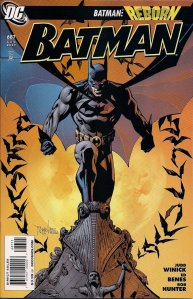 After last week’s sterling first issue of Batman & Robin, do we really need to backtrack for a Battle for the Cowl epilogue? Maybe not, but this book is a lot better than I expected it to be.

So far as I can make it, it’s not actually a BftC coda until the final few pages as for most of the book Dick resists taking on the mantle of the bat, He’s fighting crime, yes, but sticking to the Batmobile and the shadows, trying to convince Gotham that the Batman is still around.

Alfred, meanwhile, is acting not as the traditional sounding board, but as the parent; he’s seen one son die but has no doubts that his other boy should carry on the family business as a new Batman. This isn’t because he fears Dick-as-Nightwing couldn’t do the job, it’s that he recognises that Dick has made his mind up; the acrobat has gripped the trapeze, he just needs that final permission to let go, and fly.

Dick and Alfred are excellently characterised here. While the former emotes a little too self-consciously in a dawn scene with the latter (‘Do you prepare yourself for the sun to rise, or the water to flow from a tap . . .’), that’s a one-off misstep in Judd Winick’s efficient script. From a flashback scene of the young Robin to Dick’s public appearance in the Batman costume, we understand the journey he’s making.

And I truly appreciate seeing Alfred put the the role of manservant to one side and tell Wonder Woman and Superman how he feels about the loss of Bruce. I loved the emotional intelligence demonstrated when he explains to Dick why he was so often sarcastic with Bruce. And Alfred’s opinions on superhero funerals are spot on for the character and his world – his treatment of Clark and Diana shows the respect he has for them, but their primary-coloured promenades are not for the man he considered a son.

Damian also has some good moments here (I’m alarmed at how quickly I’m taking to the brat), while a world-weary Commissioner Gordon makes a wonderful remark about the people of Gotham.

One thing I didn’t like was the rolling out again of that old post-Crisis chestnut about Batman being an urban myth, someone the residents of the DCU aren’t sure is even a man. Perhaps in 1939, for a couple of months, but not in 2009, in a world of surveillance images, phonecams and so-called citizen journalists. There’s no reason the existence of Batman would be considered any less likely than that of more daytime heroes such as Flash or Stargirl. Heck, he was even a member of a UN-chartered JLA – that’s no myth, that’s a civil servant. The Bat office really needs to drop this piece of unnecessary nonsense.

On the art side, Ed Benes and Rob Hunter tell the story well. The emotional acting is spot-on, especially as regards Alfred (truth be told, Mr Pennyworth rather stole the show here), and the action sequences pop. I particularly like their Batmobile, a sexy little number with an especially good frontage – does that make them good grille artists? And there’s a moment that is obvious in retrospect, but I can’t recall it being done previously, with Dick looking at the case containing Batman’s costume.

I don’t doubt it was in Winick’s script but the artists execute the image well. One nice touch that could be all theirs is the hint of International Bore of Mystery Rā’s al Ghūl on his grandson Damian. Just look at that sinister brow!

Ian Hannin and Jo Smith’s colours work well, it seems they relished the moments they could stray from the Batcave palette for a nice splash of red or green, and Jared K Fletcher gives us a spiffy Scarecrow font.

Tony Daniel and Sandu Florea go for the iconic cover image, a Grrr-ing Batman on a gargoyle thingie, but the bats add a touch or originality (no, bear with me) as they take a laurel wreath formation in front of a subtle moon, as if anointing Dick their representative. Too Pseuds Corner a reading of the image? Ha, well, I’m sticking with it.

So while Grant Morrison and Frank Quitely’s Batman and Robin works well as a standalone, as an ancient Batman Family fan I appreciated more detail on Dick and Alfred dealing with their loss, other superheroes paying their respects and the minutae of Dick’s journey. It’ll be interesting to see how Winick and co, under the auspices of editors Mike Marts and Janelle Siegel, move the book on from here.