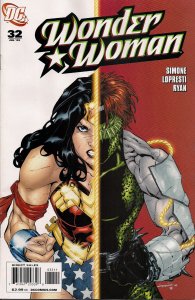 What I like about this issue is that writer Gail Simone has Diana cut loose against the monstrous Genocide. It’s about time, the corrupted corpse of Wonder Woman has been on the loose for too long.

I liked the no-fanfare cameo by DC debutante hero the Shield, aiding the rescue operation as Washington crumbles mid-battle.

The art, by Aaron Lopresti and Matt Ryan is superb, clearly showing the parry and thrust of battle, the emotions felt by Diana, Genocide, Nemesis and Prof Morrow.

The thought-narration by Diana was too melodramatic, with much self-flagellation about her use of what is obviously reasonable force to take down a major menace, and an unliving one to boot. And when at the end she declares the vanishing of Genocide ‘impossible’ Wonder Woman sounds like an idiot – even ignoring that Genocide is a teleporter, how many times has a defeated foe been secreted away by another villain? I’m all for dramatic statements, but not ones that make the hero seem dense.

The glacial pace of the Rise of the Olympian thread for which this arc is named (though the cover banner has vanished this issue – is someone at DC also just wishing it would end?) is frustrating. This month, part 7, less than two pages are devoted to the plot by Zeus to replace the Amazons.

Most of all, I didn’t enjoy the ‘revelation’ that Diana never loved Nemesis. The moment of truth was well-executed, but unsurprising. The courtship of Tom Tresser by Diana has never convinced. Instead of the meaningful moments that mark out a developing relationship, it’s been empty words and gestures. There was no spark, no chemistry between them, meaning Nemesis seemed as confused as the reader by Diana’s declarations of intent (if anything, it appeared he had some deception of his own yet to be revealed).

The idea that Diana would lie to Nemesis in order to make him her stallion, father to a new brood of Amazons, is flawed on several levels. Firstly, Diana is about love, respect and truth – she simply would not lie to a man in order to repopulate Themyscira. Then there’s the notion that Nemesis, master of deception, wouldn’t know he was being lied to. It’s as far-fetched as the veteran hero wimpering pathetically with self-pity at the news his best girl made a fool of him, which he does here. Maybe Genocide’s psychic aura of misery is at work, but I don’t really care at this point – I grew up with Nemesis the master planner, the super spy – not love’s fool. I’m beyond ready for him to step up and be Diana’s action partner, not pity object – and he was doing so well before the big downer from Diana, using the invisible craft to help her attack Genocide. Then . . . lovesick puppy who needs putting down.

And if Diana truly needed a sperm donor (has she forgotten that the Amazons were magically created?), there are likely thousands of fit, bright chaps who would love to help out.

But the notion that Diana would conspire with her mother Hippolyte – recent leader of a murderous Amazon attack on the United States – to deceive a friend and colleague and resupply her with Amazons is, at base, ridiculous. Given that, I expect Simone to reveal full details of the situation that will make Diana a heroine to admire again. Because there’s no way the manipulative female we meet this issue is any kind of Wonder Woman.