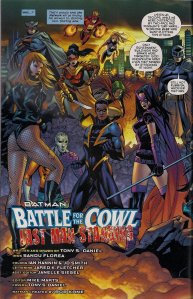 So the Battle for the Cowl concludes and the big question remains unanswered. Why are Black Canary and Huntress trying so hard to get Nightwing to notice their arses? Don’t they know he has brooding to do? Dick has to decide whether or not he’ll take on the mantle of the Bat in order to, I dunno, be more effective against Gotham criminals than the – just a second – 17 allies standing by him on the double-page splash. In a fit of true comic book logic, he feels this would indeed be the case and by the end of the issue, following a fight with nasty old Jason Odd, he’s declaring that he’s Batman. That’s despite a post-death holographic Bruce telling him not to bother, that he has faith in Dick and Tim to carry on his fight against the superstitious and cowardly as Nightwing and Robin.

For whatever reason, rather than actually share this information – letting Tim know how much faith his adopted father had in him – Dick has been allowing his loved ones to nag him about the necessity of doing his supposed duty. It’s a proper pickle, and no mistake.

Oops, I’ve turned into a comic book Brit. ‘Still hot rubbish, whoever they are’, says ‘Batman of England’ The Knight, in a phrase likely never heard anywhere on the planet, never mind dear old Blighty. That’s the extent of The Knight’s involvement in this issue. He’s a bit rubbish.

Not so his plucky ward, the Squire, aka Beryl. She’s a proper peril and no mistake, taking demon child Damian in hand and being frightfully useful in helping the brat who would be Robin find his three big ‘brothers’, Dick, Tim and Jason. I love her. Forget Barbara Gordon, Cassie the Gimp, Bette Kane, Misfit, Spoiler, Detective Harvey Dent and any other pretenders to Batgirl’s cowl, Beryl has it all. Writer-artist Tony Daniel obviously likes the girl, so send the Knight home alone/kill him off for awhile and let the Squire move her English muffins to stately Wayne Manor.

Talking of Daniel, his pencils, inked by Sandu Florea, once again look pretty good. Scene after scene by the duo is shot through with dynamism, with the final tussle between Robins I and II on a subway train effective in showing that capes are killer fashion items for the superhero set.

The script, apart from the odd moment which the mean might mock, isn’t half bad. I liked that after months of being told law and order has broken down in Gotham we see the military arriving to help, rather than seal the city off. Alfred had some great dialogue and his teaming Beryl with Bratboy is inspired. I was amused by the return and effective use, after 52 years, of Batman Jones (though he seems to have gained a tan).

I loved the sound effect of cheeky wee Damian snatching something being ‘snatch’. Best of all was the ‘Possum reflex’, a deus ex thingie that’s totally in the Bat-tradition. Dick’s narration was strong, despite my not being convinced by his decision to hide that lovely hair under a cowl.

Really, no one could have convinced me this makes any sense. I’m with Bruce, Dick and Tim have their own effective crime-fighting identities and it’s not like people won’t notice there’s a new Batman in town. Given that, and that he’d been assigned three issues which had to seem like they mattered, Daniel did a decent job, with his scripts improving by the issue. There was lots of sound, fury and cracking of heads. Thirty-three Gothamites died, which is great as it makes room for all the visiting heroes.

The only real off-note with me was the revelation that there’s something dark and evil in Jason’s pre-Robin past. Something more awful, even, than his ginger hair. The implication is that the Batmobile-vandalising hoodlum was sexually abused, which is rather a late excuse for the fact he’s grown up into a murdering nutter. Yes, Batman’s made some bad decisions in his time (shagging the daughter of an enemy, the JLA protocols, the principal of taking Tim on as sidekick after Jason was beaten to death – pretty much everything he’s done since the Nineties, truth be told. OMAC, for crying out loud), but now we’re meant to believe that rather than get a disturbed kid some therapy and into a stable home he dressed him in shorts and bootees and told him to go fight the Joker?

When Bruce comes back from the land of Post-Event, could he please bring a brain with him? Meanwhile, Dick has the cowl – give Beryl the crimefighting compact!