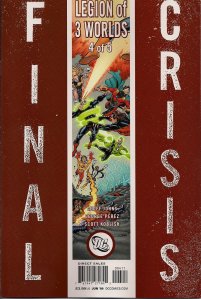 The Legion of 3 Worlds
They had 10,000 men
But when Superboy of Earth Prime showed up
He showed them up. Again

Seriously. This series was supposed to pay tribute to the Legion of Super-Heroes in their 50th anniversary year but it’s making them look like idiots. All right, there aren’t 10,000 members of the Legion on hand but there are several dozen and they’re getting slaughtered by the lunatic Superboy. Granted, he’s more powerful than the vast majority of the other heroes individually but he’s ridiculously outnumbered, and his mind is addled to say the least.

Yet the Legion, whose reputation rests on teamwork and ingenuity, can’t take them down. Not even with the help of Superman. Not even with the aid of a Green Lantern. Or the reborn Kid Flash, though as one of writer Geoff John’s pet characters he’s allowed to have a much better showing against Prime than any of the purported stars of the book. And towards the end of the issue the tide of battle truly turns when Kon-El is brought back to cloney life after a 1000 year stay in the Fortress of Solitude’s deep freeze.

Also on hand are the Legion of Super-Villains and the mystical Mordru, but they don’t do much other than prevent the massed Legionnaires piling on Prime. Nevertheless, the members who do focus on the Snot of Steel should be doing better. These guys have conquered all manner of universal threats in the past, often with far fewer members on hand. But Johns seems more concerned with returning his Stepford versions of Bart Allen and Kon-El to the DC Universe than letting the Legion shine.

Yes, there are some exciting moments – beautifully drawn by George Perez and Scott Koblish – but it’s hard to enjoy them while wondering who’ll be the next Legionnaire eviscerated. And ending with yet another spin on ‘who is the Time Trapper (this week)?’ is lame, and on the surprise scale the guilty party is about -273.

There is a wonderful scene with the Brainiac 5s discussing Frankenstein, and a cathartic action spread, but more than anything I just want this series to end – it’s destroying my memories of not one, but three, Legions.