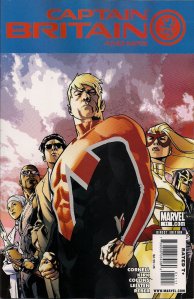 I am the Lord of tinpot reviewers, you will buy this comic . . .

No? Better convince you the old-fashioned way, then.

This truly is a first-class superhero title. While firmly set in the Marvel Universe, it ploughs its own furrow so that when existing characters are used – such as Clive Reston from Master of Kung Fu, or Union Jack from Captain America – it’s in new ways. Simply put, the landscape of the MU becomes pleasingly unfamiliar. So it is that here Count Dracula is more than a snarling creature of the night, wrapped up in his petty vengeances and vendettas; he’s a political strategist, a warlord focused on taking down the UK and Northern Ireland as part of his campaign to establish an undead homeland. He’s also a bit of a mad scientist, as we saw in last month’s prologue to Vampire State, launching vampire missiles from the moon to earth.

Writer Paul Cornell’s scripts get better every issue. The twists of the story surprise as much as the dialogue and actions of his cast. These aren’t heroes you can reduce to a single buzzword, Noble, Brainy, Flirt, Whatever – they’re already rounded characters who reveal more of themselves every time out. And while the book’s headlined by field leader Brian Braddock, the crackling dialogue shows brilliantly why Pete Wisdom is the man to handle the political strategy (click pic for readability).

The government meeting that follows this moment is as thrilling as any superhero battle, though this issue has action aplenty as Dracula’s forces wage war on our heroes.

The standout moment this issue comes as two members of the team are in dire straits. It’s not just a matter of a wholly original use of powers (well, in my experience, anyway, and I’ve read, ooh, dozens of comics), it’s in how Cornell chooses to tell the story. And I realise I’m being annoyingly vague here, but you’ll thank me after you’ve had the pleasure of discovering this scene for yourself. You’ll thank Cornell more.

The interior art is good stuff: action scenes have a pleasing freneticism, chattier moments an equal, yet different, intensity. The biggest quibble I have is that Dracula looks off from the Marvel model – I didn’t even recognise him at the end of last month’s issue, despite his having appeared earlier in the book; I thought it was some chubby second-tier vamp. The ironic thing is that this time we see an ‘artist’s impression’ of Vlad Tepes and it’s a nice nod to Tomb of Dracula legend Gene Colan. If talented pencillers Leonard Kirk and Mike Collins could keep that Drac in mind, I’d be an even happier bunny than I am now.

All this goodness comes behind my favourite cover yet, an iconic team shot from Stuart Immonen (who shrinks Dane Whitman’s nosepiece to happily traditional levels).

If you’ve never tried this book, pick up this issue. You don’t need previous ones, you don’t need last month’s prologue – the creative team give you everything you need to hop on board. Do it for me, do it for yourself. Heck, do it for Harry, England, and St George. Just do it.