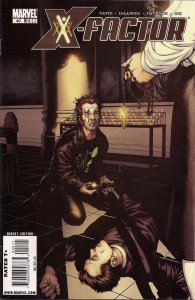 Last issue had one of the most unexpected turn of events I’ve ever seen in comics and writer Peter David, in a note preceding the story, asked readers not to spoil it online. I could live with that – if potential readers hear a buzz about an issue, but don’t know the details, they may buy the book and a title I enjoy will hopefully stick around a lot longer.

PAD makes the same request this time, promising that ‘the climax of this issue will simply blow you away’.

Well, that’s the first time indifference has threatened to make my head explode – so far as climaxes go, this is pretty flaccid. I’m happy to respect PAD’s wishes, as I tend not to spoil the end of comics anyway, but really, there’s nothing to see here, move right along . . . the final page surprise here is X-Men 101, the type of thing we’ve seen over and over again in the mutant books.

I’d likely not feel a tad disappointed had PAD not pumped up the expectation level. In the Silver Age Stan Lee would have stuck a huge hype blurb on the cover: ‘You mustn’t reveal the ending of this issue, True Believers, it’ll blow your ever-loving socks off.’ That way we’d read the story not expecting too much, and perhaps be pleasantly surprised when our feet do indeed end up naked.

But at Marvel these days blurbs are strictly for retro books like Age of the Sentry; a fun cover flash wouldn’t gibe with the noir tone I believe – and hope – PAD is returning to X-Factor. So maybe the answer is to keep the message but lessen the expectations by putting the ‘Oi, readers, zip it!’ plea at the end of the book.

Other than that, how was the theatre, Mrs Lincoln? Not bad, certainly better than many comics. PAD knows what he’s doing, so we get a typically clever – but not clever-clever – piece of storytelling, well paced and scripted. The focus is on Jamie Madrox, in despair after the events of last issue, as he revisits priest John Maddox, the only Multiple Man duplicate ever to make a life on his own. We see that even though he’s stepped away from the superhero game, Maddox remains a hero. Madrox, too, wants to leave his life behind, but in a less positive way. Their encounter ends with the surprise and me wondering what PAD will pull out of the bag next issue, as I understand more twisty moments are coming.

I missed the rest of the X-Factor team this issue – well, except for the terribly annoying Darwin – but as a focus on Madrox, this worked. He’s more intense than I like him, but it makes sense given recent events, and he’ll likely remain gloomier as the book’s atmosphere darkens. Just so long as his sense of humour returns. And while the ending speaks to X-Men cliche, I don’t doubt PAD will find somewhere new to go.

The art by Valentine DeLandro and Pat Davidson is excellent, moody and nuanced. I hope they have the regular assignment. Jeromy Cox’s colours were appropriate, happily less murky than much of Marvel’s current output, and Cory Petit’s letters were good and clear. The cover by David Yardin with Nathan Fairbairn is spot-on but by cracky, it could have done with a blurb. Don’t Marvel want to attract new readers at point of sale?