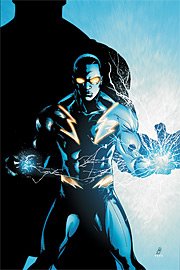 At last, a big change courtesy of Final Crisis – Black Lightning has his hair back. Suits him, too, as does the role he plays in this issue of inspiration to a deadbeat villain. Said deadbeat is the current holder of the Tattooed Man title, whom Wiki assures me I’ve read about previously, despite my having no memory of him. As we join Mark Richards, he’s not being villainous, he’s trying to protect his family from Darkseid’s Justifiers, the brainwashing shock troops who have overrun Earth. And he does a good thing in saving Black Lightning from them, as the hero arrives to investigate a transmission sent by Richards’ daughter.

He does a bad thing in being totally irritating for the rest of the issue, continually needling Black Lightning, Jeff Pierce, for being a superhero. Apparently the heroes have never done much for him.

Maybe because he’s a villainous hitman who’s worked with the Dark Side Club and Secret Society?

Anyway, his attitude, the way he treats Jeff as The Man (”the world never belonged to people like me, superstar’), is reminiscent of the way Jeff carried on in the first few years after his Seventies debut. Superman and the rest of the JLA? White honkies who didn’t understand him because he was from the Hood/Suicide Slum. Perhaps that’s the point of letting him share the spotlight in this special. Thankfully, Jeff’s long since moved on. Tattooed Man, though, he’s stuck in a Denny O’Neil relevancy comic.

Mind, it’s Grant Morrison who put him there, and it’s Morrison who gets him out again, having him learn a lesson in heroism and preparing him for the role he plays in this week’s Final Crisis 4. Poor Jeff, though, isn’t so lucky, being in dire straits by issue’s end. Before that, though, he shows why he deserves his place in the Justice League, proving smart, imaginative in the use of his powers and, most of all, inspirational. Morrison reminds us that Jefferson Pierce was a teacher before he was a superhero via speeches that are rousing without winding up cheesy.

There’ some wonderful dialogue here as, for example, Black Lightning explains that ‘I make electricity dance like Beyonce’ and Richards asks, ‘why the hero pose?’ Less successful is Mrs Richards’ assertion that her husband ‘was a superhero all this time’. Hmm, tell that to all the people he’s hurt, robbed, even killed.

In all, this book is a great tie-in, providing strong character work and new information about Earth After Evil Won, but not so essential that it should have been part of the main Final Crisis book. It’s called Submit but was all about resistance, so it’ll be interesting to see what angle the forthcoming Final Crisis: Resist takes. If it’s as good as this (cue trite end line), I’ll happily submit to its charms.

One thought on “Final Crisis: Submit”