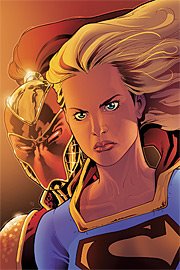 No fan of the first issues of Kelly Puckett’s run, I was going to keep passing over this book until the new creative team arrives next month, but spotted that this was a fill-in so gave it a go.

And I’m glad that I did, as it featured a coherent story, decent characterisation, very pleasant art and a fan favourite guest star (well, she’s a favourite of this fan, at least). Said favoured character is Empress, the teenage Voodoo vixen created by Peter David for Young Justice and only ever seen these days in cameos. Here she’s the catalyst for Kara’s encounter with a new villain, and while the story demands she takes a secondary role, it’s good to see Anita Fite and her toddler parents featured, rather than merely included, again.

The villain’s motivation is pretty rubbish, and a bit of a modern superhero cliche – a bystander during a super-battle, he now wants to show the world that the heroes who save them every other week are in fact A Very Bad Thing – the story admits that he’s basically a nutter. He goes by the terrible name of Aftermath but may as well be called Maguffin, as he’s around mainly to get Kara from A to B; A) being where Puckett seems to have left her, angry and confused, and B) being her current appearances in Superman and Action Comics as a calmer Kara.

And guest writer James Peaty does a good job here, showing Kara thinking her way through the story without undue angst. By the time she gets to the final page, you can accept the motivating engine of the story with her sunnier outlook.

As for Empress, she retains one of the ugliest costumes in comics, but guest artist Ron Randall makes it look almost decent. Yes, ladies and gentlemen, this Eighties discovery ((Arak, Son of Thunder) handles both pencils and inks with perfect precision, so could someone at DC please give him a regular gig? Really, Randall’s figurework is powerful, his characterisation subtle and his backgrounds ever-present – a rarity these days. And former Digital Chameleon Wes Dzioba’s palette is the perfect accompaniment.

Stephane Roux’ cover is a nice bonus, offering a pensive, determined Kara and a formidable Empress.

She has her costume and powers, but one thing Empress lacks here is her entertainingly silly tendency to say ‘Mon’ at the end of every sentence, to remind us of her Jamaican background. Still, you can’t have everything. For now, I’m just thrilled to be able to recommend a Supergirl story again.