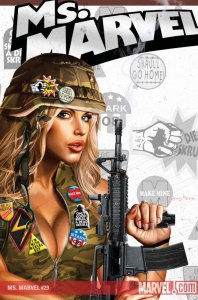 Oh look, it’s the comic I swore off last issue. Seems it’s still in my order, so let’s have a look.

Cover . . . quite amusing, a blonde woman in a Private Benjamin uniform who doesn’t look like Carol Danvers is showing us her tits and pouting. Oh, and there are some amusing anti-Skrull badges too – that’s a Secret Invasion Tie-In for you.

Inside we do find Ms Marvel and she’s mighty annoyed, apparently as sick of Skrull Summer as I am. She’s terribly peeved because a giant Skrull is smashing a building with people in it. Last issue, she bashed a nasty Skrull halfway across the city and through several buildings with people in them, but she’s not a nasty Skrull so that’s alright.

‘And with every dead Skrull, I become more determined than ever to kill all of these animals. To stack their bodies in Times Square. And to have one hell of a bonfire.’

Go Carol, go Carol! Be the best you can be, little girls everywhere will want to be you because This Female Fights Back! Fly Ms Marvel, fly to the Skrull Homeworld and kill Skrull Babies, before they become Damn Dirty Skrulls.

Ms Marvel can take any Skrull, because she has formidable weapons – see Ms Marvel’s breasts fly in the face of evil! Watch her gigantic arse defend the people of Manhattan! Marvel at those Kree-enhanced thighs!

Ms Marvel, you’re too good for us.