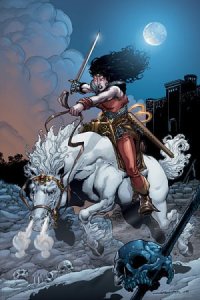 In which Diana, Stalker, Claw and Beowulf meet the demon D’Garth at a stone table that’s not in Narnia, there’s a betrayal, a twist or two and a rather sick fantasy sequence. Said sequence opens the issue, with Diana seeing just how far she may fall if she fails to hang on to her soul, infected by Stalker an issue or two back. As Her Radiant Majesty, she is served by her mother, honoured by other heroes and mistress of all she surveys with her red eyes. She’s deluded, believing the better way is to kill her foes and mount their heads on pikes.

Hippolyte, though, implores her to not trust ‘the red-eyed man’ – Stalker, unless this is Gail Simone laying subplots. Unless this is the real Hippo somehow touching her daughter’s dark dreams, it seems that despite Shamazons Attack, Diana still sees her mother as a moral touchstone, as much as the glowing lariat. That gives me hope that Gail will continue Hippo’s redemption.

The art by Aaron Lopresti and Matt Ryan is stupendous here – I thought a lifetime of comics reading had shown me all the permutations of JLA as sword and sorcery figures, but the designs here will inspire a doll or two if DC Direct has any sense. The scenery, the layouts – all great stuff worthy of a great storyline. I must say, it was fun to see that saucy Circe makes a fine kebab, and that Veronica Cale is unworthy of Diana’s notice. I liked that Darkseid is considered a personal foe by Diana, after his sins agains the Amazons, but who was that next to him, a darker than usual Ares? And the masked lady (?) at the far end of the splash head line?

We see Diana Prince’s throne (British parlance . . .) in a continuation of the Nemesis sub-plot, as he takes on the Gorilla City Guys with a bit of Mari McCabe perfume, his imager and general ingenuity. It’s great to see that he doesn’t for a second believe Diana has gone bad.

Elsewhere, Diana’s fantasy passes and she meets the Oracle, whom we’re told has a counterpart on all worlds, eliciting an ‘ah’ of recognition from Diana? Surely she can’t be thinking Babs Gordon, as this woman is a mischievous minx, telling Diana to beware of a traitor?

Mind, she’s right, and it’s the revelation of said betrayer which sets up the thrilling climax, and next issue. That also promises an appearance from a guest star who shows up in Diana’s apartment. And she’s looking good.