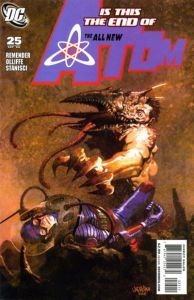 Ryan Choi loses his book, as sales once more prove the enemy few can beat (ahem! Spider-Girl, Manhunter, Blue Beetle), but wins the day. Well, to an extent. The long-running storyline in which Ivy Town residents are thrown into a world in which time runs differently and scary worms eat people gets a conclusion of sorts, but it’s not a satisfying one. A favourite character is sacrificed to no good effect, the impact of their heroic demise waved away by their supposed lover, and the villains get away. OK, the escape of Mr and Mrs Chronos gives Ryan Choi reason to remain the Atom, now Ray Palmer is back in Ivy Town, but I really want a hero to win big in his final issue. Plus, Ryan’s character demands he remain a costumed hero anyway – we’ve been following this guy for two years, seen him grow as a crimefighter; there’s no way he’d give it up, especially as his powers are now internalised.

As for the aforementioned Ray Palmer, I was expecting him to be revealed as a fake – he’s brusque with Ryan, oddly unwilling to costume up to help out, terribly enigmatic for no apparent reason and tells Ryan that taking time out from being a hero might be a good idea. He’s a bit of a jerk, truth be told. But apparently it is the Silver Age Atom, meaning that where Ryan is continuing Ray’s legacy, Ray himself is spitting on it.

I don’t know what happened to writer Rick Remender here – supposedly he accepted the Atom assignment knowing he was wrapping the book up, so why leave us with loose ends at the close of five issues? There’s no excuse – even if DC plans to have Ryan hunt down his foes in the pages of another title, this title ends here, and readers who have stuck with it want closure.

As for the artwork, it looks rushed compared to previous issues from penciller Pat Olliffe and inker John Stanisci, and surprisingly scratchy. There’s a pleasing energy to the pages, but I’ve seen this team do better. It’s as if they just gave up, along with Remender.

And that’s a shame, and that’s annoying – I’ve been a big booster of their work here, and feel the world’s smallest hero deserves a bigger finish.