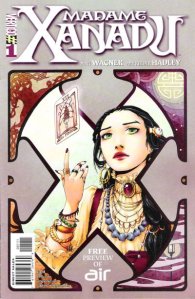 I’ve been rather excited since hearing the former hostess of Seventies DC mystery book Doorway to Nightmare was getting an ongoing Vertigo book. In the words of Olivia Newton John, now we are here, and boy, was it irritating.

For the first few pages, at least. As we meet Madame Xanadu, rather than sitting in her magic shop, waiting to warn people that they’re going to appear in an O Henry homage, she’s in an earlier time. And she’s a forest nymph. With hooves. So that’s why she always wore those long dresses . . .

What annoyed me was the flowery dialogue spouted by our heroine as she communes with other spirit types. It’s Arianrhod this, Lunar Queen that and Limetus the other. Celtic mythology a go-go. Lots of beseeching. Little fairie types – hang on, this is Vertigo, that should probably be ‘faerie’ – flitter around, wittering such things as ‘Nimue seek’ and ‘Nimue spell’. It’s only when a bunch of Druids arrive to ask her for help that it’s confirmed that in this time, Madame Xanadu is known as Nimue.

From then on, things picked up in ‘By the Runes: Chapter the First’ (again, very Vertigo – ‘chapter one’ would be, you know, kinda common, distinctly unliterary). Perhaps I relaxed into the story, as the gobbledegook quota was wound down a tad. The appearance of a druidic Phantom Stranger helped, as did ties to Jack Kirby’s Demon (handled by Matt Wagner in a long-gone mini-series) and, oddly, the current Trinity series – cos if the Morgana here becomes the Morgan Le Fay in the Demon books, as seems likely, she’s the one in Trinity.

But that’s not important right now. What is, is the intrigue we get surrounding Nimue and her relationship with Merlin, the dastardly doings of Morgana and just how Nimue gets from Dark Ages Britain (sometimes it feels like us UK folk are still there) to 21st century Greenwich Village. And how soon she’ll cover up those bloody ugly hooves.

Annoying spell stuff aside, it’s difficult to fault Wagner’s tale telling here – Nimue taps into her power with words, and Wagner does something similar, weaving a world of dark possibilities. And it’s a world brought to life wonderfully by artist Amy Reeder Hadley and colourist Guy Major. The book is filled with magical souls, but they look more real than you’ll find in many a ‘grittier’ comic. Real, yet ethereal. This is a world I look forward to coming back to, and I’m keen to see how the artists help Madame X find her way in the modern world.

All in all, it’s a pretty good first issue – I’ve a feeling this will read very well as a collection, but I’m nevertheless recommending you give it a crack now. Why wait for pleasure?