Spoiler having been revealed to have survived War Games in Robin 174 this month, here’s a one-off focusing on Stephanie Brown. Yes, Stephanie, not Stephanie and Tim – the title’s a misnomer, with Robin not even appearing in the second story, bar one panel.

Which is fine by me; much as I like Tim Drake (I can’t get used to Wayne, surely he’d keep his parents’ name to honour them, despite being adopted by Bruce?), he has his own book, and it’s a while since we’ve seen Steph, her being comics-dead and all.

So here she is in the first tale, by Chuck Dixon and Rafael Albuquerque, leading Tim into a naughty after-school activity and a mystery. ‘Puddles’ concerns a kidnapped kid and plays out satisfyingly enough. Really, I doubt anyone would buy this comic for the kicking of ass, not when there’s character work to be done. And we get it here, as we see that Tim is wondering how Steph fits back into his life, and that Steph mainly wants to make sure Tim isn’t swallowed by the Batman’s darkness.

The second story, by Dixon and Victor Ibanez, is a flashback to Steph’s time in Africa, helping Leslie Thompkins out at a clinic in a small village. We meet her wee pal, Efia, who dreams of America, and a self-style demon hunter whose cure for conjunctivitis is death. We see Thomkins as the good woman she’s been since her 1970s introduction, fighting terrifying men for the good of the village; and we see Steph realising that despite trying to leave Spoiler behind, the hero within will always out.

Both stories are enjoyable, with Dixon showing that he really knows how to write likeable, compelling characters. I enjoyed the African tale more, though – seeing the Leslie I know again, doing what she does best, rather than the woman we were meant to believe would sacrifice Spoiler to teach Bruce Wayne a lesson about endangering young sidekicks.

Plus, the art is just wonderful. In ‘Puddles’ Albuquerque gets the job done, and not unattractively, but the art seems less open than his Blue Beetle work. I suppose that’s Gotham City for you, give Albuquerque a few more visits to Gotham and I’m sure he’ll be drawing like a native. But in ‘Katavi’ Ibanez (and I apologise for lack of accents on ‘a’ and ‘n’ – blame my European keyboard) draws, inks and colours a lush Africa of believable people, convincing landscapes and dreamy skies. The pages sing. And little Efia has to be the sweetest comic book kid for years, I hope we see her again.

And I really hope DC has a regular assignment for Ibanez – his work reminds me of Renato Guedes, naturalistic yet powerful.

As for Steph, welcome back, kiddo. Go get Tim, huh?

Two tiny PSes – In a world in which Jason Todd can be punched back from the dead, is it too much to ask the Bat-Office to correct the misspelling of Thompkins’ forename that’s dogged her since her debut: just make it Lesley already!

And the cover by Albuquerque and colourist Cris Peter is nice enough, but yet another take on Carmine Infantino and Murphy Anderson’s classic Sixties Batman and Robin pin-up (the homage is credited). I’m a tad bored now! 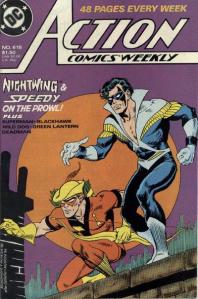 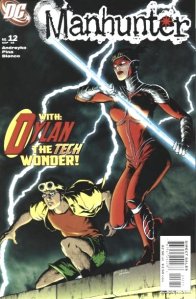 One thought on “Robin/Spoiler Special 1”