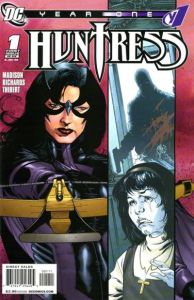 While I’d still rather see a Huntress tale set in the now, rather than another origin, this was a really nicely done comic. There were some superb bits of dialogue and narration from Ivory Madison, while Cliff Richards’ art popped.Basically, we had another look at Helena’s crime family being offed, and saw that after her subsequent substitute family was arrested, she developed hunting skills to survive. Then she’s forced on a path that will take her to Gotham, where she’d lived as a child.The vibe was similar to the Rose and Thorn series by Gail Simone and Adriana Melo. Anyone for a team-up?One thing I especially liked was young Helena ‘losing’ her Catholic faith, then regaining it with no explanation; none was necessary – she’s a left-footer. That’s how we are.