In the Sixties, the Inferior Five comic was a good-natured superhero send-up.

For one thing, it’s set in 1988. We’re in the small US town of Dangerfield, where new arrival Justin is bored and lonely.

His mother has mysterious phone conversations. 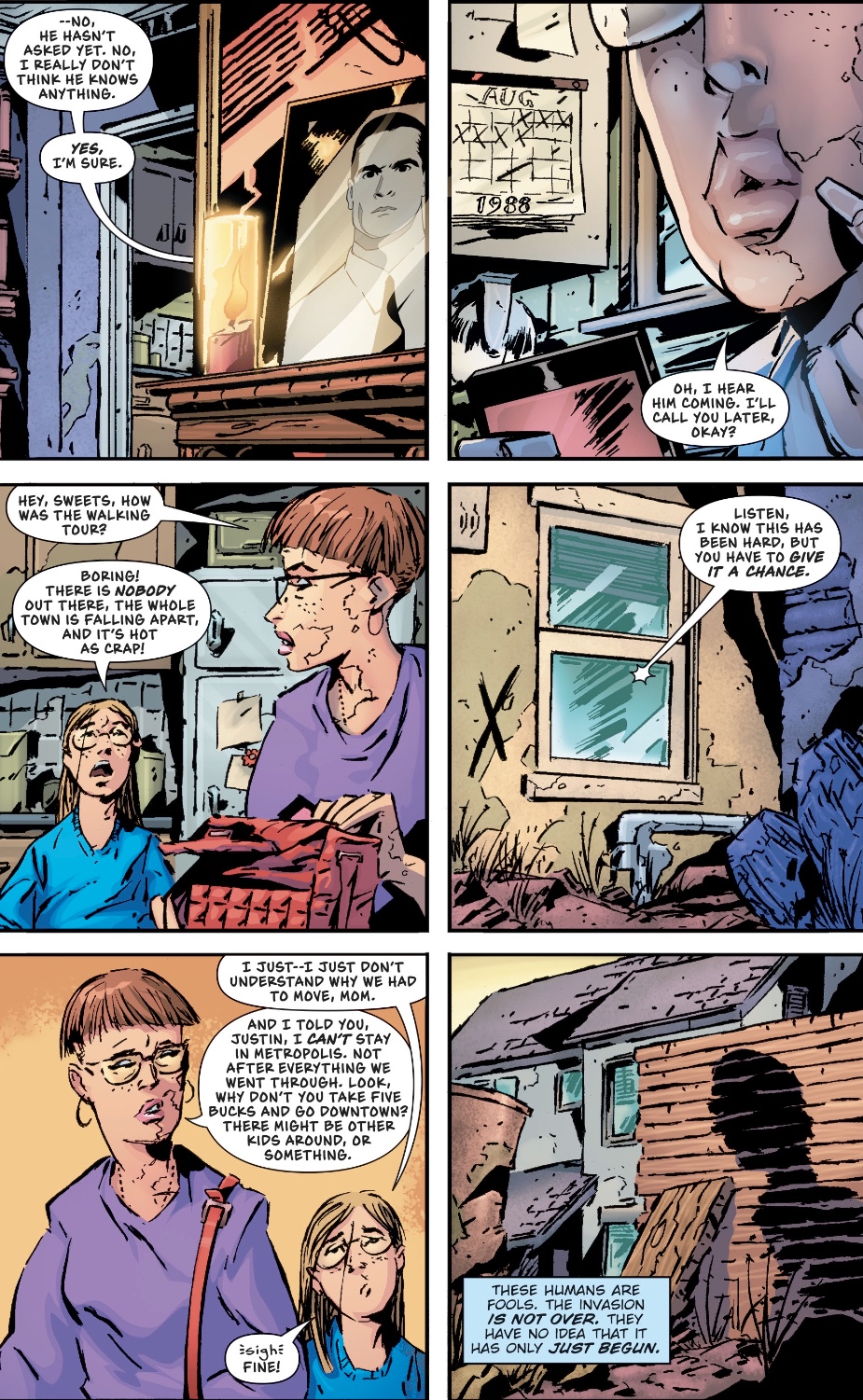 Lisa is disgusted by the state of the comic shop owner’s dental health.

Local teens Vance and Theresa rub each other up the wrong way.

And Lisa’s putting clues together with her pal Helen. Who speaks a lot like an alien who wants to sound human might. And teleports.

What the heck is going on? Another local kid Billy – he’s the Scarecrow wannabe on the cover – is terrifying, haunting the issue, marking houses with an ‘X’. Are his actions being predicted in the Invasion! comic book that annoys Lisa so? Is Vlad an impaler? What are the Variables? Are there Dingbats on Danger Street?

And those are only a few of the questions this book raises. An aspect I really like is that co-plotter and penciller Keith Giffen uses his late Eighties style, dialling back the usual comic book good looks and drawing people who actually look like people. Vlad the comic vendor even gets one of those daft great shadows over his face. The foregrounding of rocks and litter in frames brings back memories of the Five Year Gap Legion of Super-Heroes, and as it did there, the evocation of a devastated landscape suits the story.

As I indicated earlier, though, I’m not quite sure what the story is. Giffen and co-plotter and scripter Jeff Lemire drop intrigue throughout, but what the link to the original Inferior Five is, I have no idea. The only obvious – to me – nod to the E Nelson Bridwell/Joe Orlando series is Theresa being nicknamed ‘Dumb Bunny’ by Vance. It’s entirely possible there is no in-story link.

Justin’s father, he says, died in the Battle of Metropolis during the Invasion, and his mother is keeping something from him… was her husband a superhero, does Justin has powers she doesn’t wish him to know about?

Lisa suspects the town is some kind of prison, and has noticed something worrying in the newspapers.

Australia was the continent worst hit by the hostile alien alliance which targeted Earth… is that significant?

Is this series set in the regular DC Universe? It seems unlikely, as this takes place seemingly within a year of the Invasion! crossover… then again, if Dangerfield (and its Australian equivalent) are part of some government experiment, as seems possible, they may be in stasis fields or somesuch. Answers on a postcard…

There’s another element to this comic, a back-up featuring The Peacemaker, told from the point of view of Suicide Squad high muck-a-mucks Amanda Waller and Rick Flag. Waller has sent him to Siberia to hunt down a super-weapon. 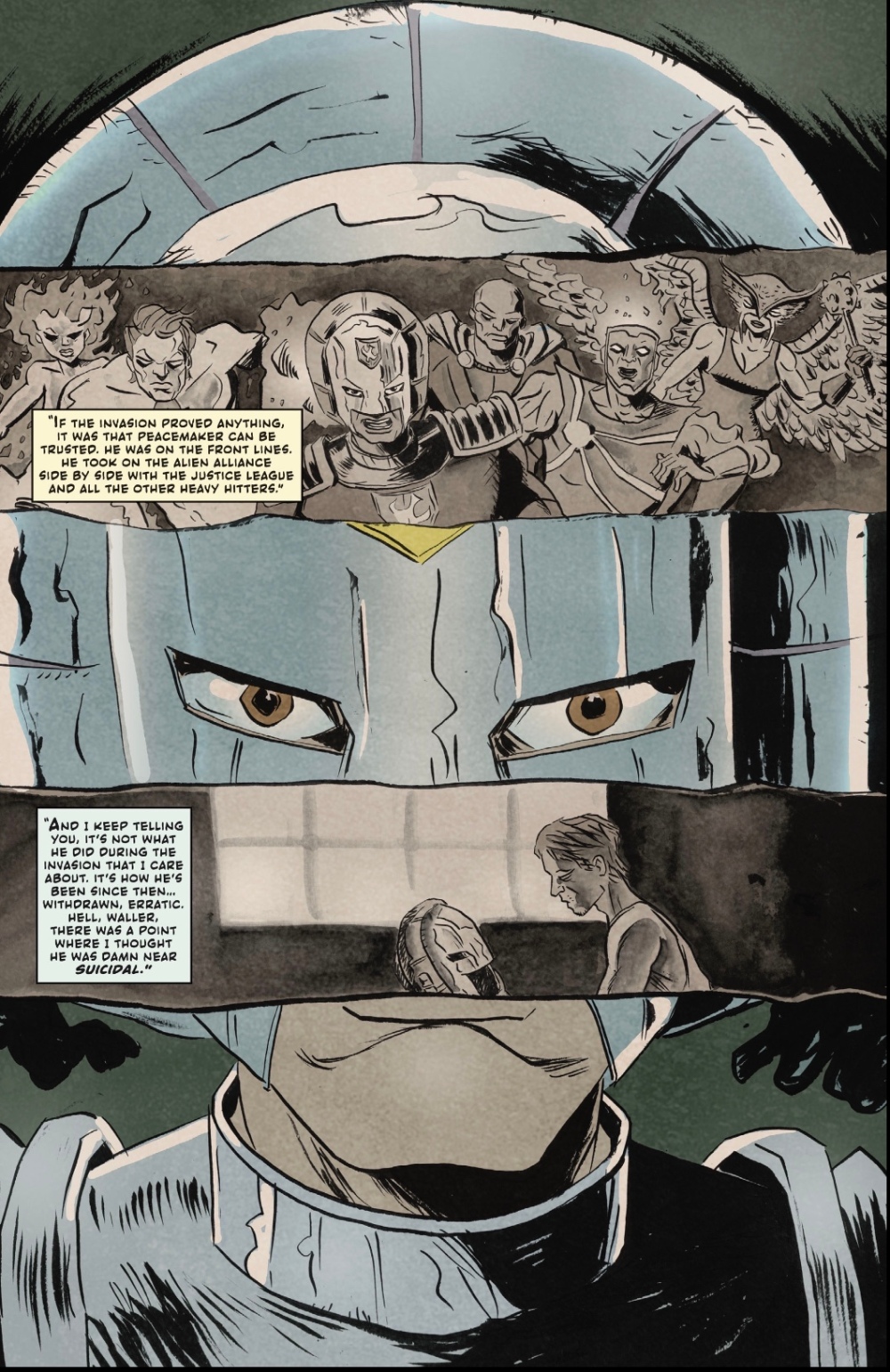 Flag is uncomfortable because he reckons Peacemaker is too unstable – and this is a man who works with Captain Boomerang and Deadshot. Waller is so oddball that she thinks his MO makes sense… 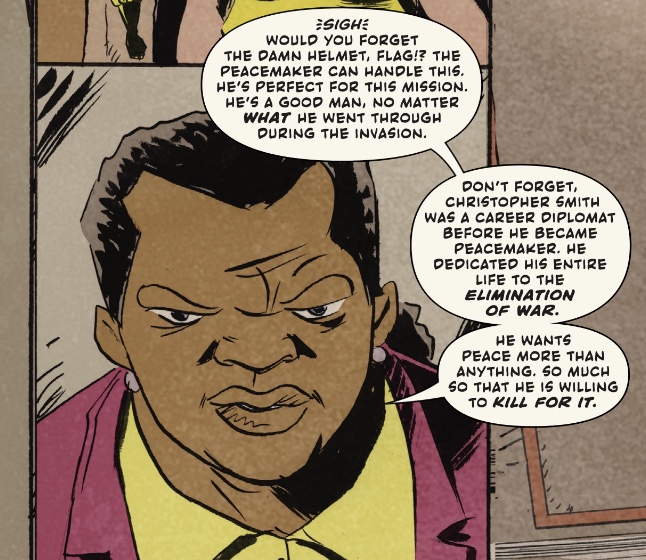 Lemire draws as well as writes this short, which links to the main strip, and it’s a sharp, great-looking extra. Jose Villarrubia gives the story a vintage feel with muted colours and yellowing gutters. Rob Leigh letters in his usual, more conventional style.

Will Peacemaker make it to Dangerfield soon? I wouldn’t bet the farm…

I would bet that you’ll like this comic. Give it a go.