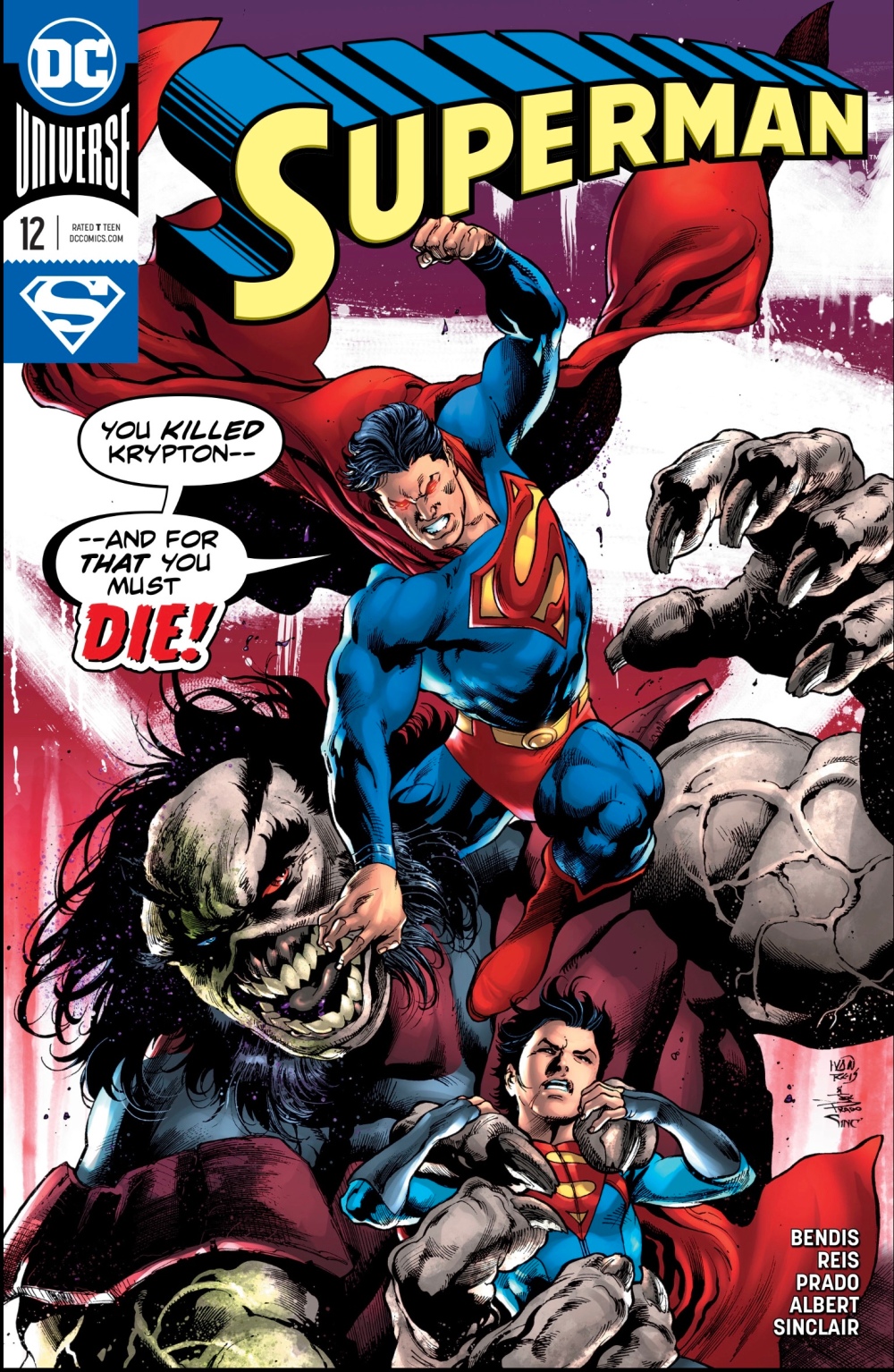 Like some kind of space cavalry, Kara the Supergirl and Krypto the Superdog have arrived to help Superman, Superboy and Jor-El take on Rogol Zaar, General Zod, sundry Phantom Zone escapees and an attacking space armada. A spark of optimism hits Superman.

Amid the fierce battle, there’s yet time for sweetness.

And when the heroes make a strategic retreat, all living members of the El family are united in love… with one exception.

As they ponder what to do next, Supergirl informs her cousin that she needs a super-sidebar. 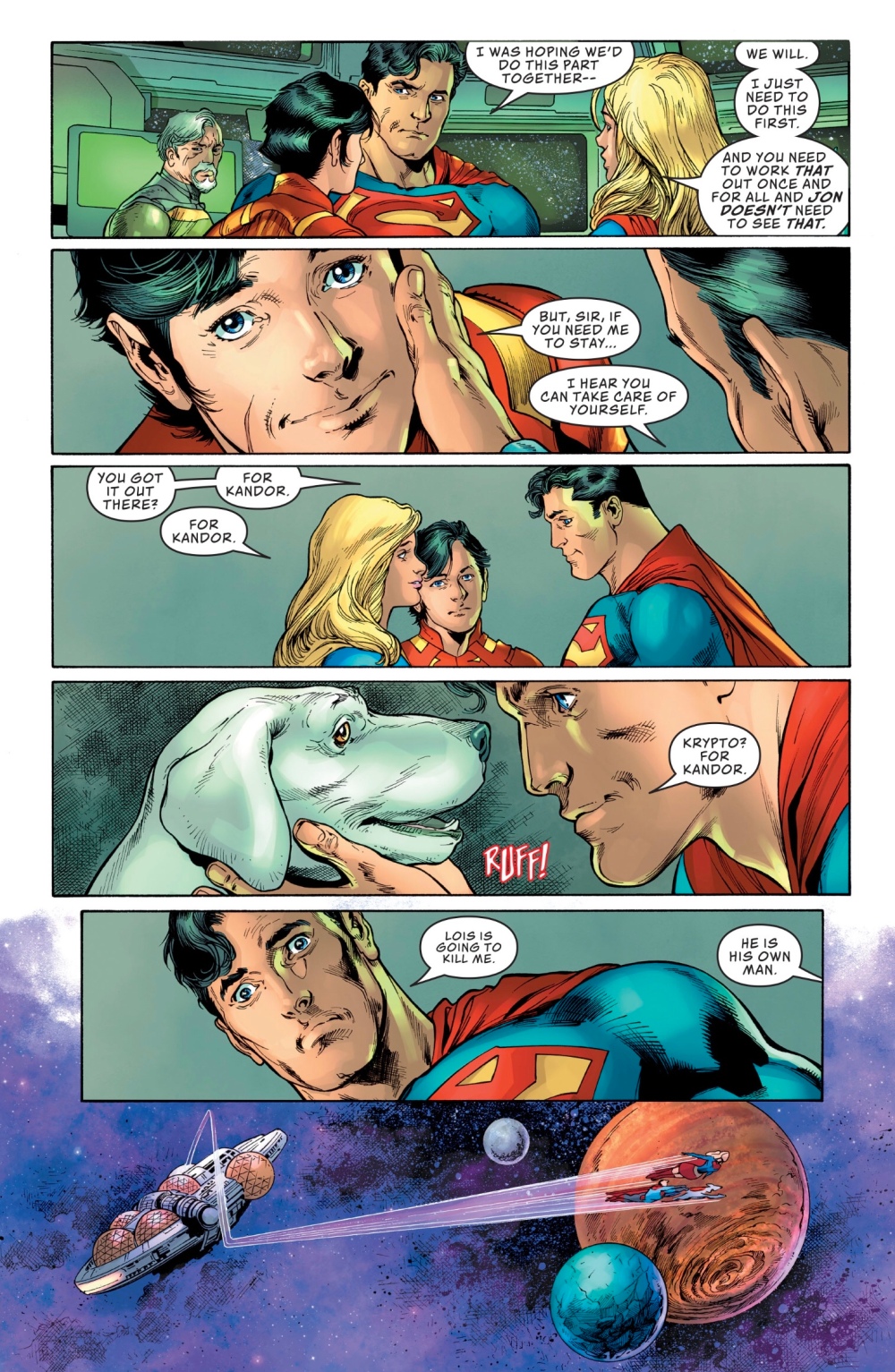 That’s a bit of an offnote in a generally great issue: is Supergirl implying she expects – wants? – Superman to kill Rogol Zaar? Writer Brian Michael Bendis really does well by Kara, making her so feared and respected that alien races flee at the mere sight of her (mind, they’re back a few pages later – maybe it’s a miscommunication with penciller Ivan Reis, perhaps it’s to do with something that happens in this week’s Supergirl, which I’ve yet to read – watch for a review).

The Superman Family cuddle is just gorgeous, the expressions on the faces, the body language – it’s lovely work from Reis, inkers Joe Prado and Oclair Albert (there are no page breakdowns, so imagine they’re now a blended being) and colourist Alex Sinclair. Given no one, unsurprisingly, invites intermittent lunatic Jor-El into the circle, it’s weird that later in the issue (earlier in the story timeline) we see this exchange between Zod and Clark.

Superman still gives his back-from-the-presumed-dead father the benefit of the doubt when he’s accused of shadiness? After everything he knows Jor-El to have done? 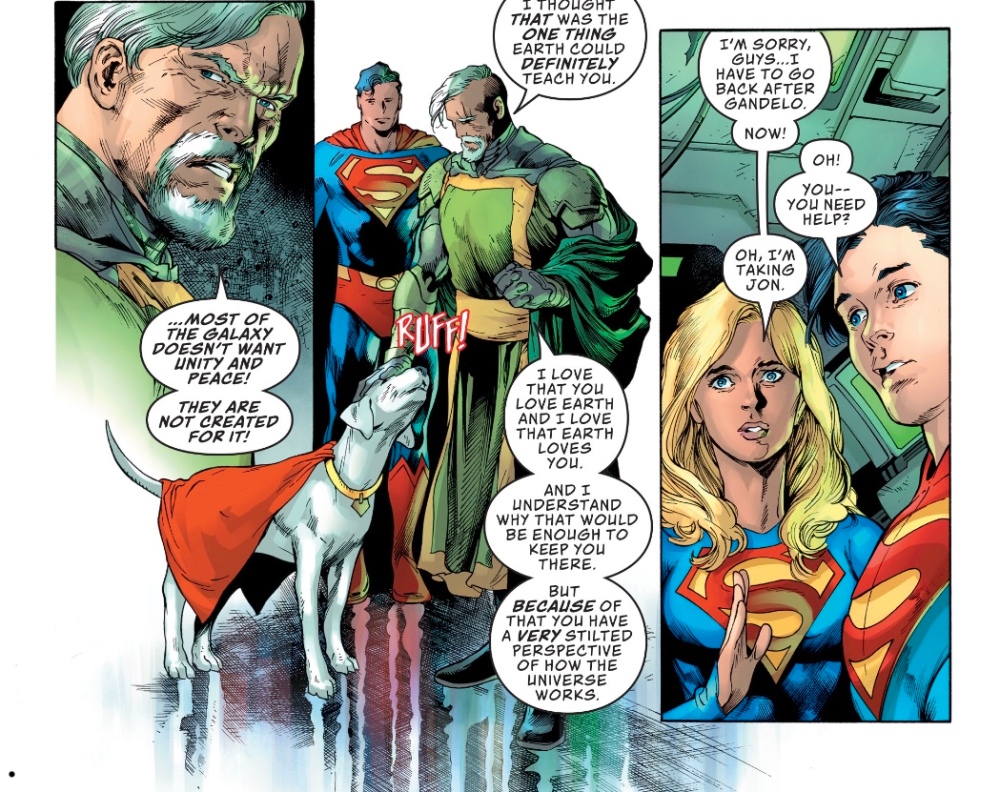 What’s up with Supergirl’s priorities? Yes, Gandelo needs bringing to justice, but isn’t the Zaar/Zod situation more pressing? Again, maybe Kara’s own book will shed light on this.

Random moments of joy: Phantom Zoner Jax-Ur’s opinion of Zor-El on page one; the inclusion of Krypto’s classic logo; actually, every single moment with that gorgeous power pooch; Kara’s remark as she meets older-than-expected Jon inside Jor’s ship; Superman’s constant grinning at working alongside the super-side of his family; and a very intriguing next issue blurb.

I give Bendis kudos for not having people constantly chatting in space – Superman and Zod manage it when they’re in their special super-speed place, otherwise it’s off the table. This does, though, mean that Rogol Zaar gets not a single line, reinforcing his position as perhaps the least imposing Big Deal villain ever. The supposed killer of Krypton has less villainous charisma than Koko, Brainiac’s pet monkey.

Ah well, you can’t have everything, and if, as I suspect and hope, Zaar’s claims ultimately prove a pack of lies, no one will care.

For now, it’s thanks to Bendis and co for another cracking issue.

Now, I’d better go and catch up with Supergirl…