Thirteen proves an unlucky number for Derek James as his series is cancelled – a shame, as Sideways has been my favourite spin-off from DC’s Dark Metal event. Little by little I’ve got to know Derek’s world – his character, his family, his powers, his potential – and enjoyed it all enormously. How much I’ve liked an issue has always been linked to how much it tied into the Dark Multiverse business – the more it connected to that overcomplicated nonsense, the less I cared. I suspect the connection hobbled this title in the market, but this series has never been less than a compelling read, with #7’s examination of grief being one of the best comics I read last year.

The finale brings closure to Derek’s quest to learn who killed his mother and why, and it turns out that storytellers Kenneth Rocafort and Dan Didio have some surprises in store

The book opens with cosmic gatekeeper Tempus chatting to a mysterious figure about Derek.

Whoever could this be? If you’re ever read a parallel world story, you won’t take more than a second to guess. Corny? On the one hand, yep; on the other, Derek’s entire superheroic career is connected to the DC Multiverse and this kind of thing, well, it’s just Tuesday.

Back on Earth, Derek comes face to face with someone he’d never expected to meet. 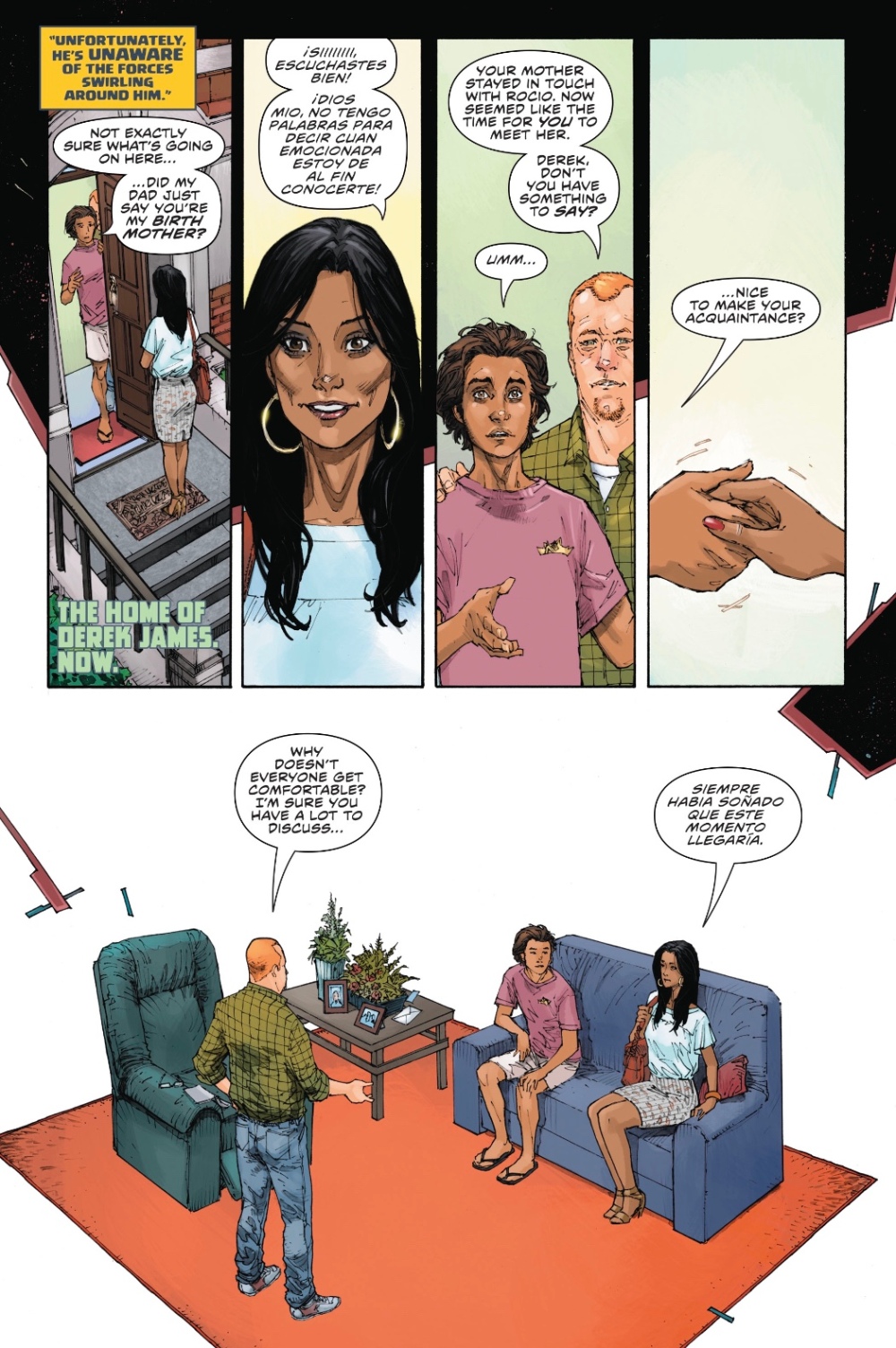 (‘Rocio’… a bit of Rocafort, a smattering of Didio, we see what you did there!)

Kudos to Didio for some nicely nuanced writing, eschewing the obvious melodramatic routes of instant connection or teenage anger. Instead, Derek feels a little flat. Rocio seems a decent person, and of course she had her reasons for giving him up, but the consequence is that she’s nothing to Derek – Helen and David, who adopted him, are his parents. Maybe one day Derek and Rocio will have a relationship, but right now she’s just a stranger getting in the way of his mourning his mother.

The meat of the issue is Derek confronting his mother’s killer. I won’t reveal all – there’s still time to buy this book – but again, good on the creative team for providing a surprise, and one that works.

The book ends with Derek taking best pal Ernie on a trip to make up for a recently interrupted date; before leaving, though, he says goodbye to his Mom in a way that makes wonderful emotional sense.

Rocafort complements Didio’s dialogue with first-rate visuals, the facial expressions always telling us what someone is thinking. The splash in which Derek catches up to the killer is very well composed, right down to narrative box placement (perhaps the choice of always excellent letterer Travis Lanham), while another great sequence shows us, in a casually skilful way, how alike Derek and Rocio are physically as questions are answered and passions flow. 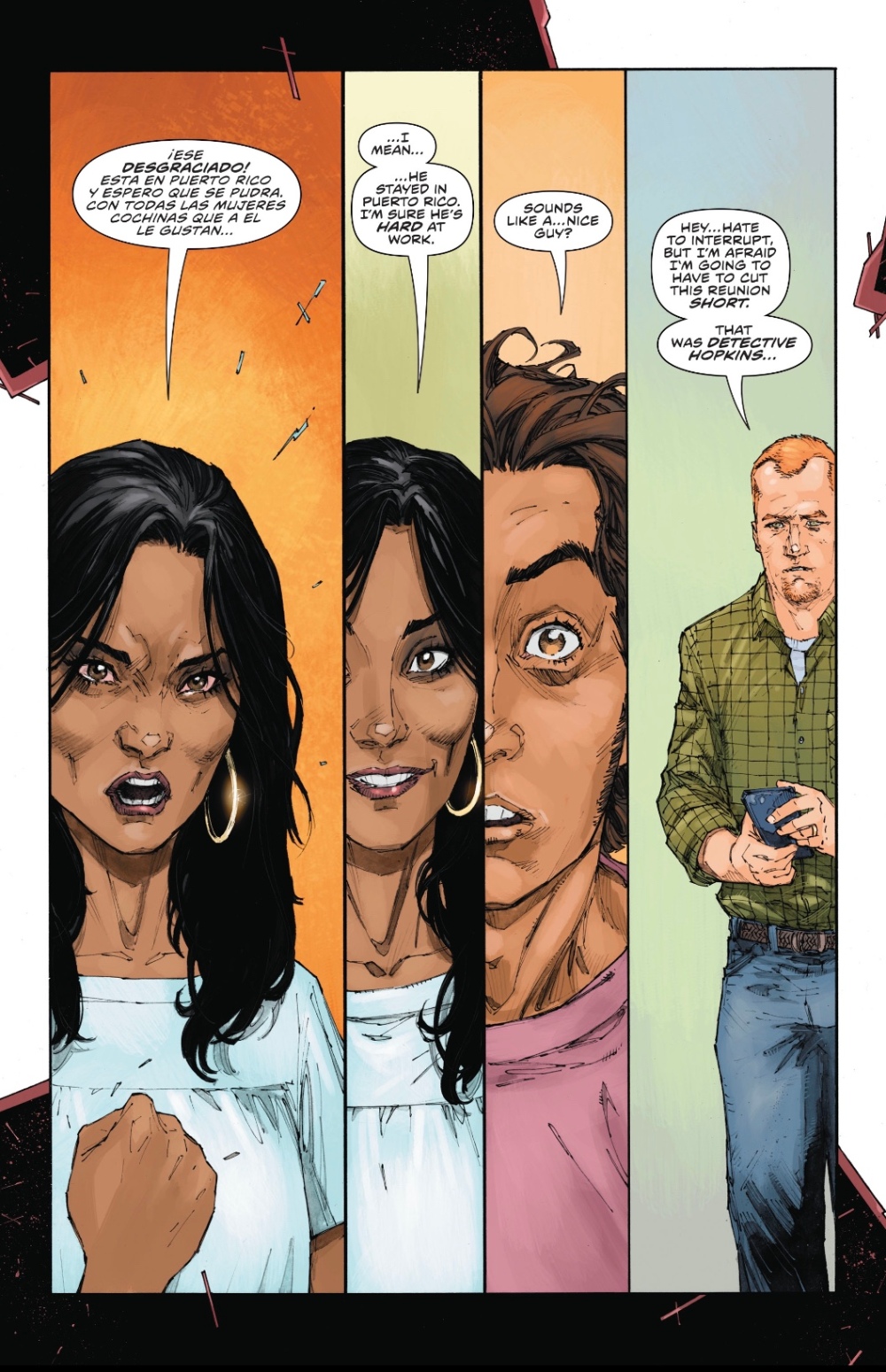 I especially appreciate the presentation of Derek’s dad throughout this series – David’s never really connected with Derek in the same way Helen did, and he’s not as indulgent as she was, but he’s not a terrible guy – he’s trying to negotiate his own feelings and hold their suddenly centre-less family together. Rocafort and colourist Dan Brown capture his complexity.

There’s one big question left dangling and I don’t know whether I want it answered. I do know that I want to see more of Sideways – this series has reminded me of Gerry Conway and Pat Broderick’s Fury of Firestorm, a huge compliment, I hope Derek James, like Ronnie Raymond, gets another shot at the big time. Sideways deserves it.