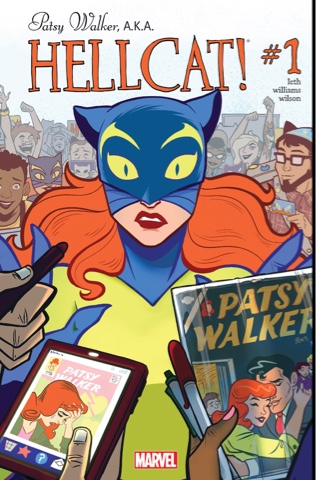 Patsy Walker, former teenage star, Avenger, Defender and Satan’s daughter-in-law detects trouble with her ability to sense supernatural energy. She intercepts Ian Soo, who’s just used his brand new telekinetic power to steal cash from a security van. He’s hardly A-grade villain material – he thinks the name Telekinian is clever as heck and has only turned to theft because he can’t pay the rent on his Brooklyn flat.
After talking him out of the villainous lifestyle Patsy winds up his new flatmate – it seems she’s been living out of a closet in the building where She-Hulk has her law offices. Shulkie – Jen Walters when un-green – isn’t exactly heaving with work and has to let Patsy go from her position as in-house investigator. But then Patsy has a eureka moment… 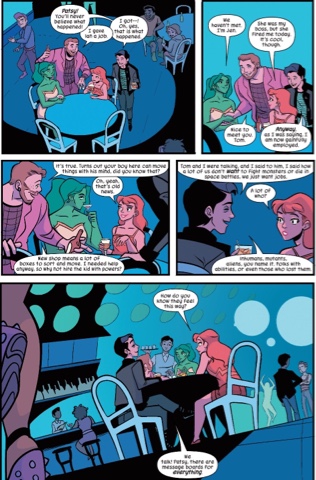 Having been a superheroine since the Seventies, it looks like Patsy Walker is returning to her Forties roots as a character straddling the humour and romance genres. Yes, she’s in costume for most of this entertaining opener, but it’s very much a day-in-the-life story. And given that any successful first issue sets tone and direction, it’s a safe bet this is the territory writer Kate Leth and artist Brittney L Williams are staking out. The story calls back to Patsy’s pre-Marvel Universe incarnation with an update on what Hedy Wolfe – her frenemy long before the word was termed – is up to, and the surprise return of another old pal.
The characters are fresh and funny in this all-ages book that feels very much of today. The problems of paying the bills during an economic downturn, the matter of fact inclusion of characters who happen to be gay, the nostalgia trend… once more Marvel is ‘the world outside your window’.  Leth’s dialogue is zippy and fun, and I like the Hero Hotline direction in which she’s taking Patsy and her Pals.

Williams’ artwork is very likeable: open, clean, breezy and the perfect complement to Leth’s script. The only thing I don’t like is Patsy occasionally being drawn in ‘chibi’ style. I didn’t actually realise that was what was going on until I read the creators’ comments at the back of the book – I simply assumed the off-key stumpiness meant Williams couldn’t keep the look consistent. Now I know, I like it even less, as it pulls me out of the story every time it happens while serving no purpose I can see. I hope Williams packs it in, as her charming art doesn’t need the gimmickry.
Colourist Megan Wilson and letterers Joe Sabino and Clayton Cowles complete the core creativite team, ensuring everything looks bright and reads well.
At first glance, this looks very Unbeatable Squirrel Girl, but the tone is less all-out laughs, a little more naturalistic. I can’t see this comic being for everyone – chibi fans, subscribe now – but it could be for you. Give it a go.