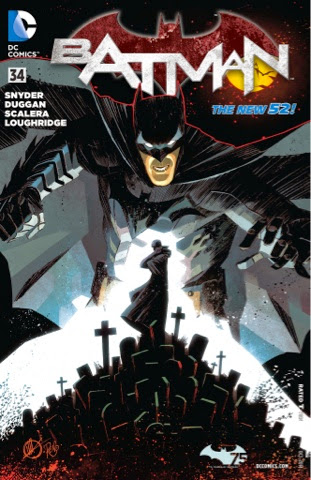 After the long look back at Gotham that was Zero Year, this issue catches the book up to the events of DC’s weekly Batman Eternal series while introducing a new madman to the mythos.
The Meek is wandering Gotham, murdering the patients of Dr Leslie Thompkins, not because of her link to Batman but because he disagrees with her belief that all life has dignity.
Or something. As comic book killer motives go, it’s a little opaque. I suppose if you’re out to murder pretty much at random, a GP’s patient register is as good a guide as any. And given what we learn about his ‘career’, it seems The Meek is more about quantity than quality.
Regular writer Scott Snyder co-plots this issue with new-to-DC Gerry Duggan as a prelude to the latter’s upcoming Arkham Manor series. And on the basis of Duggan’s script, I’m in. Events are crystal clear, the script terse, and tense. And he writes a brilliant Harvey Bullock.

Matteo Scalera’s layouts are as thoughtful as they’re enticing. His Gotham is haunted, a place of the dead. Standout pages include the Batman Eternal primer and the chilling final image, while a single panel of the Batmobile zooming away from Wayne Manor is a gem, with the colours of Leigh Loughridge making a big contribution to the mood throughout. Steve Wands’ lettering is as excellent as ever, and Scalera’s cover with colourist Moreno Dinisio perfectly sets the tone for the issue.

With next month being a Future’s End entry, and Snyder and regular artistic partner Greg Capullo set to start their next big storyline after that, it seems The Meek’s tale will be picked up in the aforementioned Arkham Manor. I can’t wait.