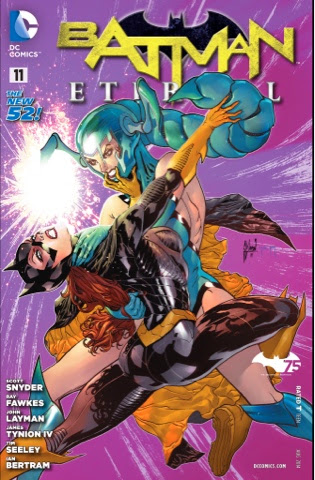 Well, that was unexpected.
After ten issues of typically intense Gotham action and character work, Batman Eternal takes a decidedly comic turn. And it works brilliantly. All credit to writer Tim Seeley and artist Ian Bertram for a story that reads and looks like nothing else in the Batman universe.

Oh sure, its use of characters from Grant Morrison’s Batman incorporated recalls a delightful madness we’ve seen previously. And the art is reminiscent of that book’s offerings from Chris Burnham. But Seeley and Bertram turn the nuttiness up to 11, making this less an issue of Batman Eternal than The Brave and the Bonkers. Even the title, Day of the Dads, is a joke – but a relevant one. 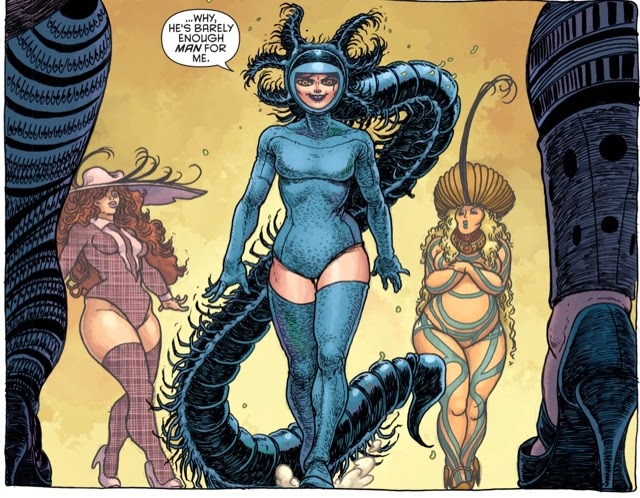 Seeley plugs into several of this weekly series’ ongoing plots – Stephanie Brown’s journey towards the Spoiler identity, the jailing of Jim Gordon, the return of Carmine Falcone – while applying a layer of lightness we’ve not seen previously. The cover-featured plot thread is set in Brazil, where Batgirl is pursuing a TV actor seemingly connected to the framing of her father for the death of hundreds in a rail smash. And while Barbara Gordon is typically intense, the situation isn’t. 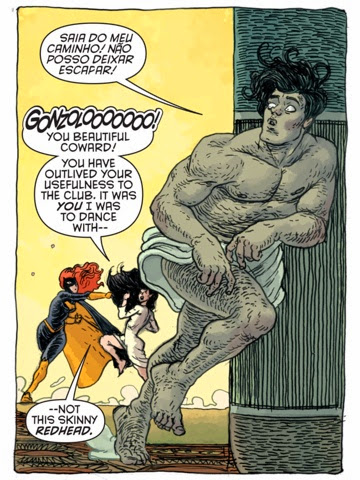 And Bertram embraces the ‘comic’ in ‘comic book’, exaggerating characters and settings. His sexing up of the players – Rubenesque women, ultra-buff men, and Starfire – is equal opportunity. Bertram’s visual creations and recreations are joyful, from an unusually big-eyed Batgirl to the crazy coils of Scorpiana. And I like that he doesn’t rule his panel borders – all frames are freehand, making for a welcome wobbliness. The pages are a huge palate cleanser for eyes weary of DC’s New 52 grimness. I missed Bertram’s work in the recent Gothtopia storyline, but I’ll be watching for his name from now on – as well as Burnham, there’s a Frank Quitely vibe and perhaps a smattering of Alan Aldridge. Whatever influences I’m seeing or imagining, the art works, Bertram knows what he’s doing. 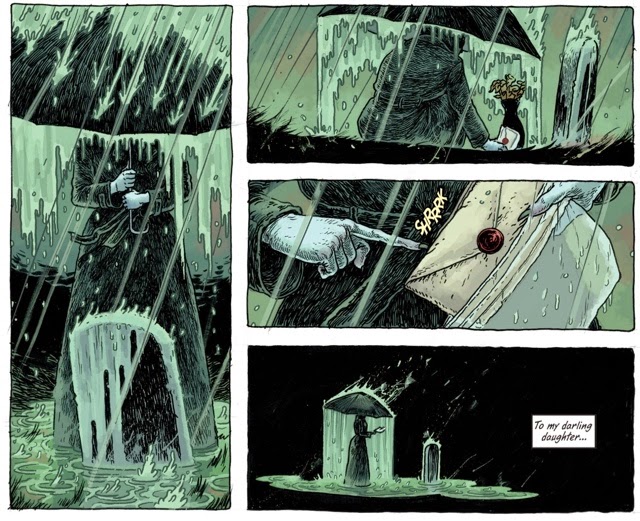 While the soufflé superheroics are what prompted this review, Seeley and Bertram also click well in the straighter scenes. Alfred’s attempt to reconnect with estranged daughter Julia at Wayne Manor make for a quietly effective drama, while a graveside moment drips with Dickensian melodrama. The latter sees Bertram conjure up cracking compositions, with Batman’s entrance especially effective. Dave Stewart deserves lots of credit too, for his well-considered, expertly applied colours throughout the book – every scene sings. Dezi Sienty’s letters are understated compared to the work of his colleagues, but they do the job nicely.
Guillem March’s cover is a nicely bombastic opening image, made all the bolder by the colours of Tomeu Morey. It doesn’t tell us exactly what to expect inside in terms of the visuals, but there is a hint of a different tone.
This is part 11 or a series that’s running 60 issues or something, but anyone could dive in and enjoy this – it’s a superbly crafted comic that isn’t afraid to throw fun in alongside the serious business. Need I say, recommended?