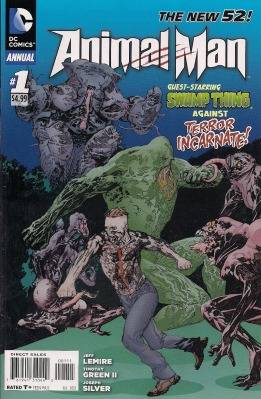 Socks the cat, former avatar of the Red, tells Animal Man’s daughter Maxine of an early attempt by the Rot to rule all. More than a century earlier in Canada, a Swamp Thing and an Animal Man fought back the forces that devastated their community, but the Rot promised it would return.

Which it did, which is why Maxine, her mother, brother and grandmother are on the run while dad Buddy seeks out the present day Swamp Thing to beat back the Rot that’s been trying to wipe him out for the first nine issues of his title. And which, it seems, will continue to do so right through #17 of his series, and sister book Swamp Thing.

What a lot of Rot. I’m all for an epic storyline but I’m already tired of mangled monstrosities attacking the Bakers. I was hoping the annual would provide some respite via an untold tale, or a side story bringing in a guest star. Maybe a page to colour in and a maze or two. Anything to provide a palate cleanser.

But no, just as Batman expanded its page count to give us yet more background on the Court of Owls, so Animal Man gets a 38pp extra story and we get more on the Rot.

Which isn’t to say this isn’t a quality Rot-Fest. Writer Jeff Lemire tells a decent tale, and relates it even more to Buddy’s present day woes via a vision predecessor Jacob has after Swamp Thing Jack Crow opens his mind with a tuber. Jacob not only ‘meets’ Buddy, he sees a modern Metropolis in which the Justice League has been utterly beaten by the Rot. 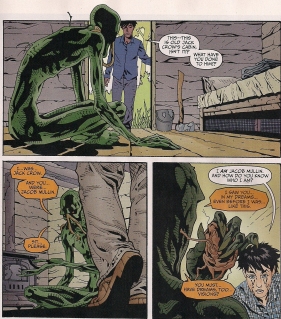 And Timothy Green II draws up a storm, giving us an adorable Maxine, a sour Socks and a great-looking flashback. Jacob is a sympathetic figure, while this past Swamp Thing is memorable in his perambulating green bean way. I like how Green draws Jacob as if hanging, as his world turns upside down. And there’s an especially spooky moment as we see the two men Buddy knows as the Hunters come together for the first time. Lovern Kindzierski’s colours, meanwhile, add extra dimensions both natural and unnatural, while Jared K Fletcher ensures the calligraphy is creepy.

But it all seems so unnecessary – we already know Alec Holland comes from a long line of Swamp Things, and could easily surmise Buddy wasn’t the original Animal Man. That there has to be a balance between the Green and the Red and the Rot is pretty obvious. So why spell it out again? Jeff Lemire has proven he has a formidable imagination, as recently as last week in his Justice League Dark debut; it’s a shame he went back to the Rot well again for this issue.

On the other hand, if you can’t get enough of the Rot storyline, this annual is unmissable, with its well-crafted script, handsome artwork and extension of the threat into both past and future. There’s even a cover by the regular series’ starting artist, Travel Foreman. It’s just not for me.