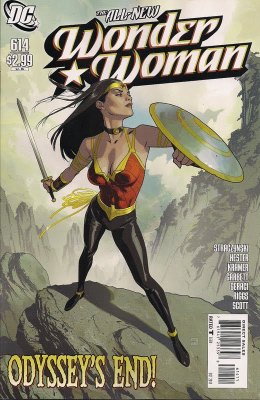 It’s been the longest storyline in Wonder Woman history, and possibly the worst. Despite bright spots from writer Phil Hester, J Michael Straczynski’s Odyssey has been a mess, trying to ‘fix’ the character not by focusing on what originally made her popular back in the Forties – a mix of  fantasy and reality, a dose of humour, nutty villains, a smattering of bondage – but by moving her further away from what she should be, making Diana a Xena without the wit.

Well, here’s the final fling for the JMS run, as Diana faces the goddess Nemesis, driven mad by the burden of souls crying out for justice. It’s a decent tussle, with Nemesis shifting form to prove a bigger threat to Diana. But having finally become whole last month, Diana’s capable and confident, happy to be facing a familiar variety of menace rather than a confusing new reality. Nemesis forces Diana to kill her, and we’re reminded that this isn’t the Wonder Woman we met at the start of the Odyssey – this one regrets taking any life, even one that threatens everything she knows. The burden of Nemesis is mystically thrust onto Diana, changing her form, filling her with a lust for vengeance.
But having spent so long regaining the person she was, Diana chooses to shake off the spell. She’s Diana, the one true Wonder Woman, and she is rewarded … she’s suddenly back on Paradise Island, her home. Sisters Philippus and Artemis are alive once more, as is her mother, Hippolyte. Diana is overwhelmed with love, and chooses to stay on Paradise Island awhile, despite a message from Batman that there’s a Gorilla Grodd-shaped threat to be faced.
Why doesn’t Wonder Woman leave to help? Because she knows that whatever the problem, it won’t last. Change is coming. ‘That glimpse into another possible world, it’s made me aware that existence is fragile, always trembling under unseen pressures … always ready to give way to a new reality. That’s how I know it’s about to happen again. I feel it.’
And yet, Diana isn’t worried. She knows that whatever happens she’ll remain her mother’s daughter. An Amazon. Wonder Woman.
Whew, talk about ‘it’s always darkest …’ Hester has completed Straczynski’s grim story, with a few flourishes of his own, and brought Diana back to the proverbial Happy Place. For the first time in an age she’s at peace, with her sisters, by her mother’s side. She’s enjoying the downtime, before things shift and she has a new set of challenges to face.
A bit too meta-textual? Maybe, but it makes sense. The Wonder Woman of the Silver Age gave way, via the Crisis on Infinite Earths, to the George Perez version, who lived through such reality-blips as Zero Hour and Infinite Crisis. As a mystical creation, it’s possible that she would become attuned to the signs. And as Wonder Woman, the most centred of superheroes, she would know that while she can’t stop the changes, she certainly can deal with them. Bring it on.
The issue’s opening battle, while important in the sense that it’s Diana vs the power behind her recent trials, really isn’t the thing this issue. It’s what it represents – the end of the affair. Straczynski’s infatuation with Wonder Woman proved brief, and damaging, but Nemesis defeated, Diana asserts herself and finds her way home. It’s going to be shortlived, but for a few pages, Diana attains a kind of ecstasy.
And how I love the Diana/Hippolyte relationship here. There’s none of the antagonism that too often defines their interaction, just love and understanding. Hippolyte teases her daughter about her latest uniform (‘Themiscyran themes, but in a form the mortals would find appealing’) and refers to Batman as ‘your Bat-friend’. We also get to see Hippolyte overseeing the daily affairs of the Amazons, something I can’t recall seeing in decades, and it’s wonderful to see – not a mad queen, but a wise ruler.
Massive thanks to Phil Hester for closing out this run on a note of optimism. Credit, too, to pencillers Don Kramer and Lee Garbett for appealing scenes of war and peace alike, nicely inked by Drew Geraci, Robin Riggs and Trevor Scott. The scenes of Nemesis inflating – Kramer and Geraci, I think – just about put me off my lunch, but the pastoral joys of PI meant my sarnie got swallowed.
I’m not keen on Josh Middleton’s cover – Diana’s face looks very thin as she stands 50ft tall, but I expect many readers will like it.
So that’s the end of a difficult year, and Wonder Woman Volume 3. Things can only get better.
Can’t they?