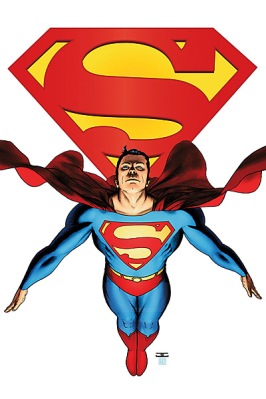 Superman’s S is one of the most-recognisable symbols in the world. Eight months into ‘Grounded’ and I suggest swapping it for a Z, as in Zzzzzz.

For this really is the most tedious of tales. I bought this month’s issue to give new scripter Chris Roberson a chance to impress, but while there is a twist, the tone remains the same. And it’s a tone dictated by Superman’s sad sack attitude. Once more, the man meant to inspire us is all ‘what good am I doing really?’ and ‘I don’t know what I believe anymore’.

What I believe is that I may be the last reader of this book. I’m such a cock-eyed optimist, with such affection for Superman, that every month I expect him to just get a bloody grip. But he doesn’t.

‘Grounded part five’ (there have been two fill-ins, but they were very much ‘Grounded’ fill-ins, so they count, as does the prologue – eight long months) begins decently enough, with a page of Superman helping the good citizens of Des Moines, Iowa. But then he’s on the phone to Lois, wondering what his purpose is. Lois, reasonably, mentions the old ‘truth, justice and the American way’ mantra. ‘Maybe those are just words,’ whines her husband, ignoring the fact that as Clark Kent, he’s built a career on the power of words.

Soon he’s attacking a fire at a chemical plant with lax safety and environmental standards. Lois is already there, at the behest of a worker fired over his protests. Superman’s all set to have the factory shut down, but an employee protests that this would put everyone out of work, and so be bad for the town’s economy.

Goodness, Superman hadn’t thought of that …

Superman tells the shifty boss, whom he knows has been bribing safety inspectors, that, OK, he won’t shut the plant down, if they maybe just try and be a tad cleaner, pretty please and cross your fingers. And he tells Lois, grabbing her by the arm, that she cannot print the story.

Yes, he’s lost it. But he thinks that perhaps he’s seeing things as they really are for the first time, in shades of grey. Because, you know, the economy is having a tough time and maybe bosses do have to cut corners. And so long as no humans are harmed, who cares about a few plants?

Once upon a time, Superman would have cared. The guy who can change the course of mighty rivers with his bare hands, and so find a way to save jobs and the environment. But he’s been replaced by a weak-minded ninny who folds before whatever the last argument made to him was.

On a more hopeful note, the super-powered teacher from a few issues back is still gunning for Superman (er, in a car – is everyone grounded?). And the final page sees the arrival of ‘The Superman Squad’, four futuristic characters in search of Mort Weisinger. Let’s hope they take our hero somewhere and knock some sense into him.

Lois thinks her husband is under the influence of red Kryptonite. Oh, if only. He’s under the influence of J Michael Straczynski, a writer who says he’s a fan of Superman, but just doesn’t seem to get him. ‘Grounded’ is right – he’s grinding Superman into the ground. While a self-doubting, naive Superman might work in his Earth One graphic novels, here we have a grown man, a hero with decades worth of experience of the world, acting like an angsty teen with a mid-life crisis. With every month this quest, as the issue’s legend has it, ‘to rediscover truth, justice and the American way’ becomes more tragically laughable.

Chris Roberson does what I guess he’s been asked to do – keeps the script sounding very JMS, meaning Superman is whining and pompous by turns. Which is a shame; sure, he’s working from JMS’s notes, but I was hoping that at the very least, a new writer would have Superman cheer up, maybe meet a few puppies and smell the odd flower. Smile at people rather than lecture them. It’s not actually impossible to ask questions while being an attractive character.

The artwork by Allan Goldman and Eber Ferreira is better than the storyline deserves, with a good-looking Superman and Lois in action against realistic backgrounds. OK, so maybe Lois shouldn’t dress like Daisy Duke to investigate corruption at a chemical plant, but perhaps it was hot even before the blaze …

John Cassaday’s cover design fits in with the current DC Icons promotion, as would pretty much any of his pieces of art for this run. And it’s very nicely coloured by the talented David Baron. It’s a shame Superman isn’t smiling, but I guess that’s not allowed.