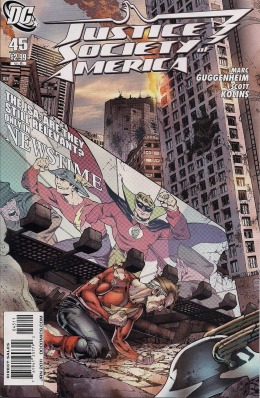 Is there any buzz about this book yet? Because there should be. The new creative team of Mark Guggenheim and Scott Kolins came on board last issue and immediately changed the feel of the title. Out went the endless hero vs villain crowd scenes, in came a tighter team, allowing for more satisfying action and characterisation. Suddenly, the book had focus.
If you missed the beginning of Supertown, you should know that a new metahuman appeared and began wreaking havoc, the JSA turned up to defend humanity and a battle royal raged for hours. Before the heroes finally overwhelmed their foe, the city of Monument Point was devastated, and Green Lantern Alan Scott paralysed.
The continuation begins with a flashback to the Second World War, with Scott and Jay Garrick, the Flash, on a black ops mission in Libya. We don’t find out what their ultimate assignment is until near the end of the story, as it weaves back and forth between then and now. The now segments see Superman arrive to begin helping with repairs, and apply his J Michael Straczynski Sad Face to the situation; and Molly Mayne Scott visiting husband Alan in hospital, accompanied by Jay.
Kolins’ artwork really conveys the delicacy of GL’s situation – hooked up to medical monitors, head shaved for examination, I’ve never seen him look so old, so fragile. It’s easy to forget that the senior JSA members have been active for 70 years, given how many random energy blasts and spells have tweaked their physiology and frames, but there’s no denying it here.
Jay is shaken by his oldest friend’s plight, and furious when a senator summons him away from hospital, especially as said politician led the HUAC panel which accused the JSA of being traitors in the 1950s. As it turns out, America’s Oldest Public Servant, Sen Eagin, has information Jay needs to hear about the super-villain who caused Monument Point to be razed, now codenamed Scythe.
Meanwhile, back in the past … it turns out the black op is a little too dark for Alan, when it becomes apparent that the Nazi experiment they’re meant to destroy, Project Drachen, is a baby (like GL, seven decades later, he’s helpless, hooked up to monitors). Flash is more ready to follow orders, arguing that they’re at war, and the two come to blows. By dint of wielding the most powerful weapon in the universe, GL wins and the baby lives. And guess who the tot grew up to be?
Yup,  apparently he’s not just a random super-villain – Scythe matters.
Why that is, we don’t find out right now, as the rest of the story concerns Jay’s reaction to knowing that, albeit inadvertently and due to their humanity, he and Alan gave rise to the situation which destroyed Monument Point.
Yes, it’s that old chestnut of hero feeling bad over the unavoidable lesser of two evils – as Molly points out earlier in the story, the JSA saved millions of lives. But that doesn’t stop a crowd railing on the JSA, accusing them of not caring what happened while they were fighting Scythe, and it doesn’t prevent Jay from being affected. He may not agree that the JSA is to blame, but that doesn’t mean he’ll turn his back on the city, and by issue’s end he’s resolved to remain, and rebuild.
While Flash and GL have the spotlight, Wildcat, Lightning, Dr Midnite and Mr Terrific dance around the wings, doing what they can. The latter of the quartet continues last issue’s fretting that he’s losing his Terrific IQ, but keeps his fears from his friends. That’ll end well.
I’m impressed with how quickly and thoroughly Guggenheim has found his voice with this book. He’s not trying to emulate the hugely popular Geoff Johns JSA, but going his own way in order to better serve the characters and the readers. This means that rather than feeling like a desperate retread, the book boasts the freshness that heroes who were once so innovative deserve.
And the art of Kolins is a big part of the JSA renaissance. He’s going for a more painterly look than that used in his long Flash run (no pun etc), but because he’s spent years as a continuity strip artist before tweaking his style, the illustrations retain a fluidity that, say, the art of Alex Ross lacks. But characters have a new strength to them, an intensity dialled up a notch when colourist Mike Atiyeh applies his enviable skills (click on image to enlarge). 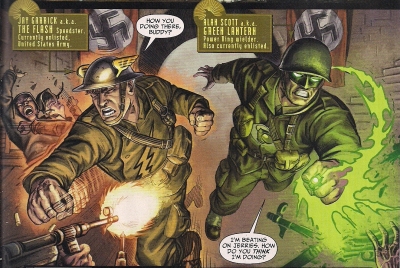 Flash and GL really look like they mean business in their military uniforms (I love Jay’s Mercury cap doubling as a tin helmet), while Jay’s rage looks set to boil over here.

The artistic mood suits a storyline with so many sombre aspects, such as the aftereffects of the Scythe attack, and the dirty war our shining heroes were once dragged into. It’ll be interesting to note whether the tone lightens as the JSA bring new hope to Monument Point, which I don’t doubt they will.
Also helping the new JSA run find its artistic feet is letterer Rob Leigh, with his attractively Art Deco eagle-topped plaques introducing team members. It’s remarkable, how something so small can so definitively add to the attractiveness of the page. Leigh fills word balloons nicely, too!
Topping off the issue is a fine cover by Shane Davis, Sandra Hope and Barbara Ciardo – the Golden Age-style poster art smartly contrasts with Jay’s situation, while hinting at the issue’s themes.
With its splendid melding of ideas and execution, this looks set to be one of the best modern JSA runs. I hope superhero fans try it.