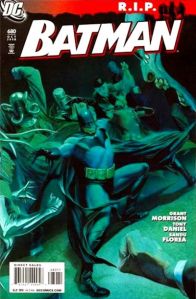 Batman, brain addled but fighting back as the Batman of Zur-en-arrh, takes the battle to Arkham Asylum, where the Black Glove and his Club of Villains are using the helpless Nightwing in a game of deadly chance. And Joker is the wild card.

Batman RIP has really kicked into high gear for me in the last couple of issues, so much so that I’m sad the main course is over next month. Before that, though, there’s plenty to savour here – the villainous perversion of Le Bossu, the hilarity of Bratboy Damian, the best explanation of Batmite we’ll ever get . . . and most of all, the sheer, bloody-minded determination of Batman not to let evil men prevail.

Plus, there’s a Joker who’s far scarier than any previous comic, and certainly any screen, version of the Clown Prince of Crime. Writer Grant Morrison writes him some terrifying moments, but it’s the artwork of penciller Tony Daniel, inker Sandu Florea and colourist Guy Major and letterer (yes, letterer) Randy Gentile which truly brings him to chilling life here. The cover design is rather good, but never mind a fight club scenario, Alex Ross’ Batman is a refugee from Fat Club. Get a new model, man!

If you’ve not been following the storyline, and this little precis intrigues, don’t seek out the single issues. Hang on for a collected edition, because that’s where this complicated tale of the Batman will really fly.

One thought on “Batman 680 review”